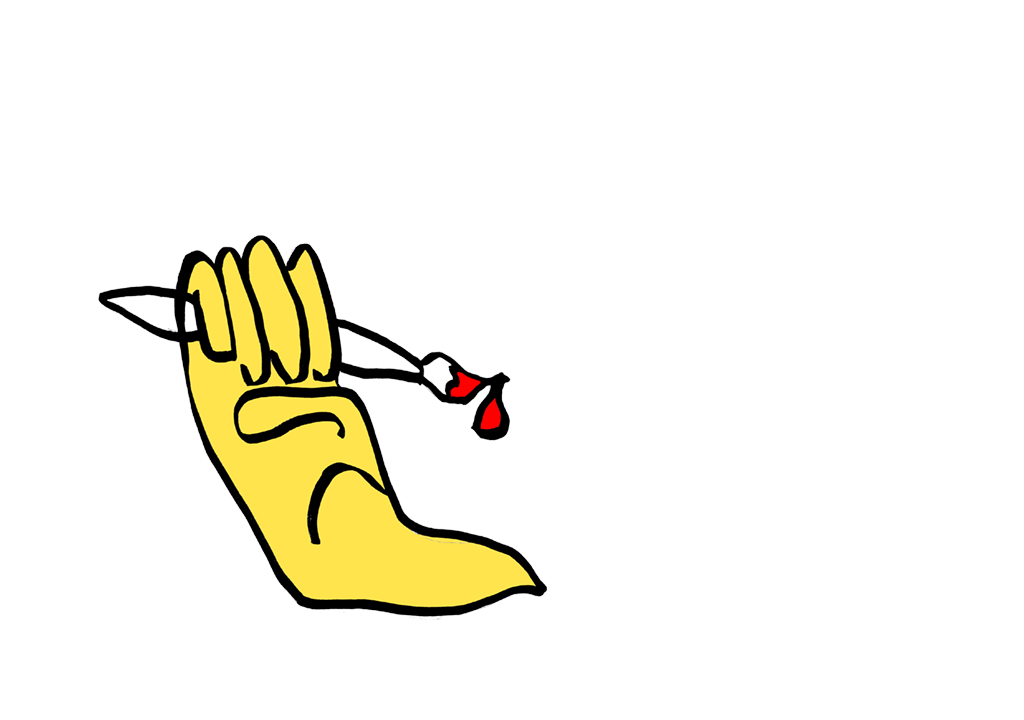 We’ve looked at your Instagram, it’s really fun and personable. How central is it to you, to represent yourself as the work you do, but also as the values you have?

I remember hearing someone talking about how they saw, when stories came in, how they wanted to see that as a kind of definitive change between the main page being your portfolio, and the stories being about people learning about your life. When it first kind of came along, it felt like it was a bit of both. And I think a lot of people, including me, found it quite hard to kind of get the balance. It became a lot more focused when everyone started using it, and the whole influencers thing came about, and your page had to really represent you. I think as illustrators, that kind of needed to be your portfolio, because less and less people are worried about a website, and people will go and look at your Instagram before your actual website. So, I try not post pictures of my daughter on my main page and just stick that stuff on my stories, because it goes after a day, and that’s quite good really. It’s nice to post that stuff, people want to see what’s going on, but it’s also good for it to go away.

You also seem to work across a lot of different medias, which one do you find the most fun to work in?

As you get busier and you get more into a professional career its less about what’s fun, and more about what people are asking you to do. As my works gone on, I pretty much only work in digital now. I was very much into drawing at university. I realised after leaving, that I wasn’t really getting much work, and maybe digital was kind of kicking off, so I had to then teach myself Photoshop and all of that kind of stuff. It just kind of felt like digital was going to save me more time. I don’t really use pens and paper at all, apart from like making cards for my family, that’s about it really.

We’ve seen your posters with @inspiredaub. We wanted to know a bit more about your journey from Bournemouth to Bristol. What brought you here?

I grew up in Newport, which is just over the bridge in wales. Growing up, well, I say growing up, when I started going out at like 16/17 we used to come over here clubbing a lot. When drum and bass and dance stuff was really like kicking off. I actually put Bristol as my first choice on the UCAS form but apparently, I filled out the form and put Bournemouth first. I had an interview there and liked the tutors, so I just thought fuck it. Leaving, when I finished my degree, I just wanted somewhere where I could go and live for a couple of years, so I could start seeing if I could get some illustration work. Me and a few mates decided to move to Bristol. Yeah, I’ve been here pretty much ever since.

Could you tell us a about a project you’ve done that’s specifically Bristol based?

I painted a Gromit dog sculpture raising money for charity, for amazing charities, for kids hospitals and that sort of stuff. It was a great experience, but it was also a selfish thing, in that I wanted to work with an amazing brand; Ardmon, Shaun the Sheep, Wallice and Gromit, and all that are iconic. But it was good in a sense because it made me feel a little bit more of the Bristol art community. The work I do is not necessarily putting on shows and exhibitions and all that kind of stuff, which is what some illustrators may do and what I used to do in the old days, so I feel a little bit disjointed from the Bristol community sometimes.  Doing this sort of thing kind of helps me feeling like I’m part of it.

It seems like a lot of people know you most for the work you do with bake off. But what’s your favourite personal project that you’ve done?

My work changes constantly, and you change what you like about your work constantly. Personal projects are not something that I get that much time for, and by the time I’ve experimented and got to a point where I’m like yeah cool let’s do this project, I have to start doing paid work again. There’s this food hall called Source, which is just on the corner, opposite my studio. Was it last year? Feels like maybe it was two years ago. I can’t remember, time goes so fast. Anyway, I just kind of went and spent a few days with the butchers, in there. Just because I’m interested in food illustration, but I spend all my time drawing cakes, so I just wanted to experiment with some other types of food. I went in there and took lots of pictures and sketches. Things like a whole half of a pig, which is like sliced down the middle. I watched them chop it up into bits, and just seeing that process alone was really interesting. It’s not something that I have much of a concept of, we’re very removed from that kind of industry. That was really cool.

What opportunities do you see for young creatives in Bristol?

I think there’s plenty. With the amount of people that are coming here from other places, because they see it as, whatever the fucking Mayor keeps calling it, a creative hub. I think there’s plenty going on and I think the city is clearly on the up. There’s a problem here too though. Stokes croft used to be the place to be, but I think that’s kind of changing. It’s just becoming too expensive to live and I think that’s going to be an issue for Bristol moving forwards. It’s making it much more difficult for creatives to live here, and I don’t really see what can be done to change that.

What advice do you have for young creatives starting out?

Work a lot, and do lots and lots of work, and just be focussed on that.

Tom Hovey is Welsh Illustrator currently based in Bristol. Though he is best known for his acclaimed food illustrations with the Great British Bake Off, his work is dynamic and fluid, and has seen him apply this unique style across a broad range of practices. These include TV graphics, food illustration, editorial, book illustration, storyboarding, animation, apparel design and murals. Tom is a family orientated guy, juggling his home and professional life with a fierce passion for everything he does.