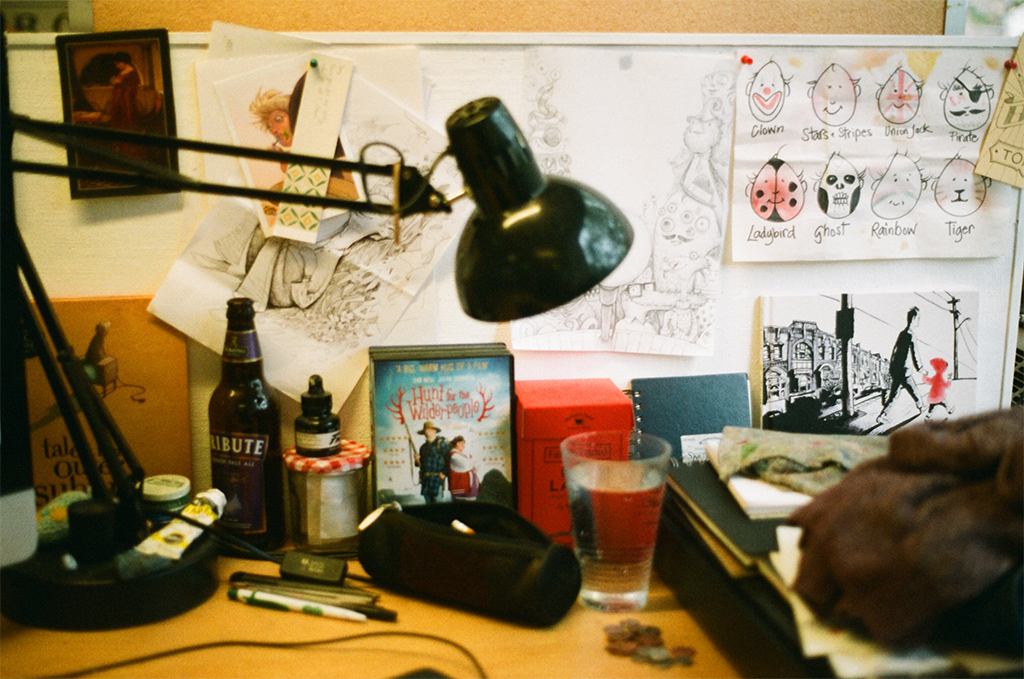 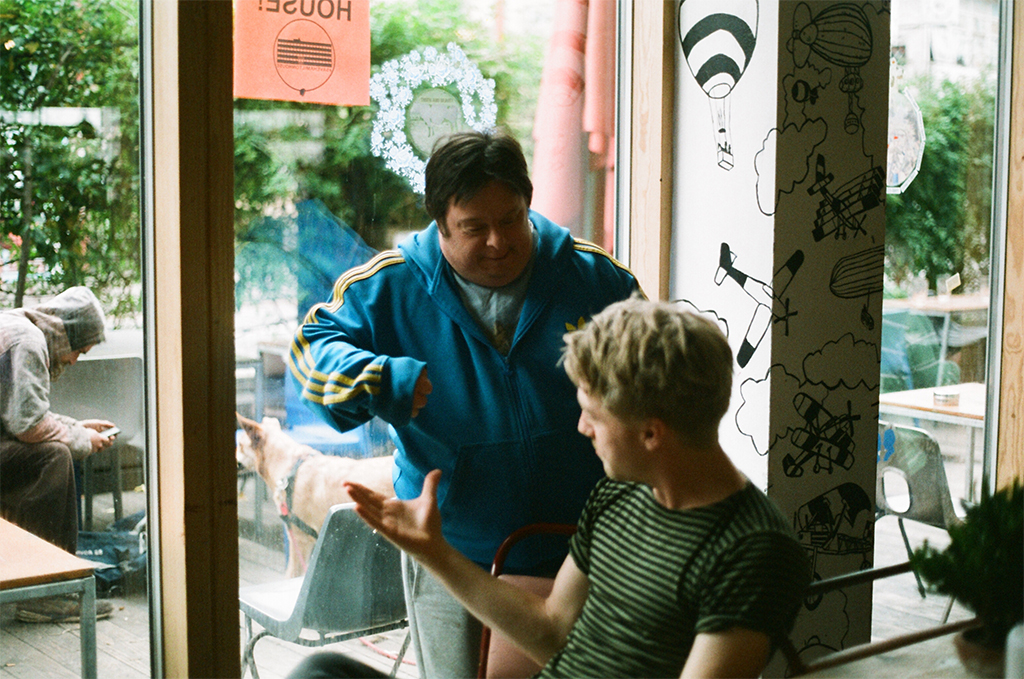 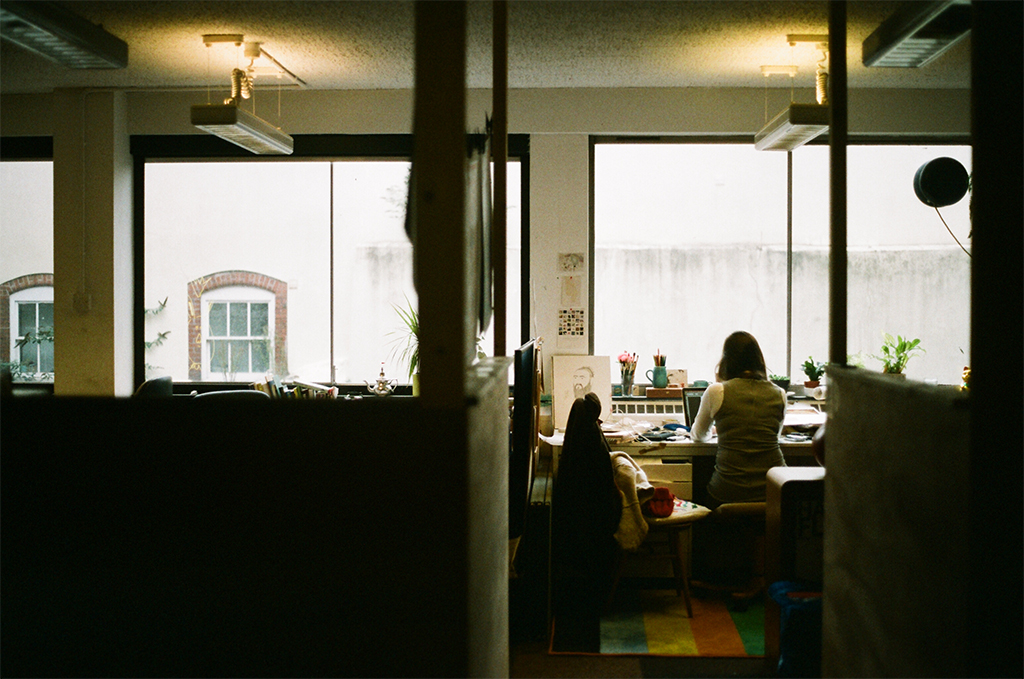 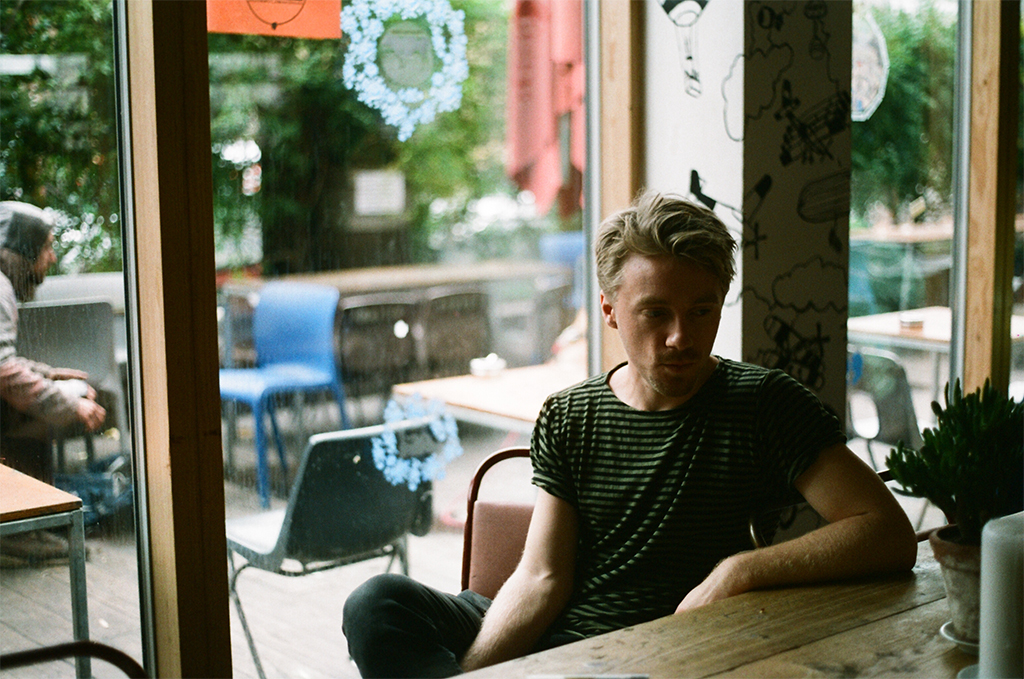 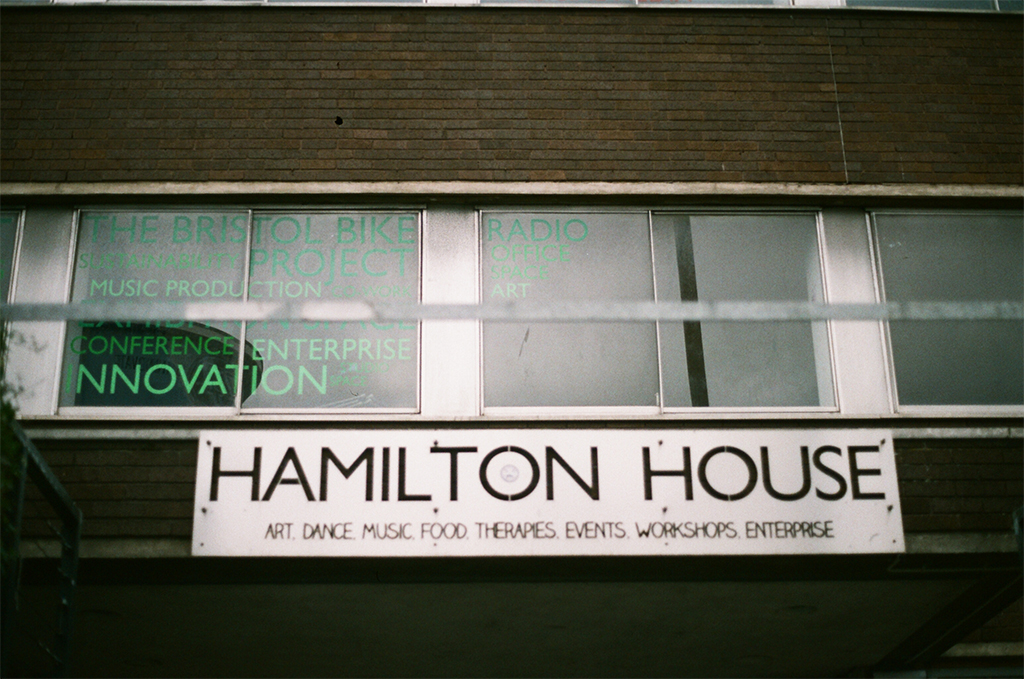 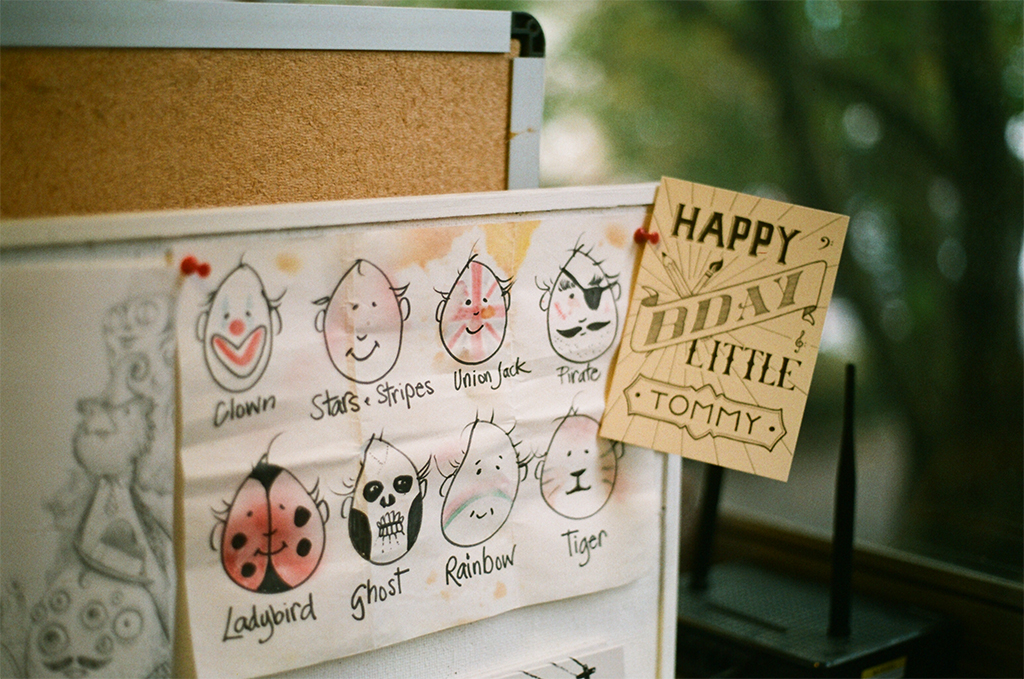 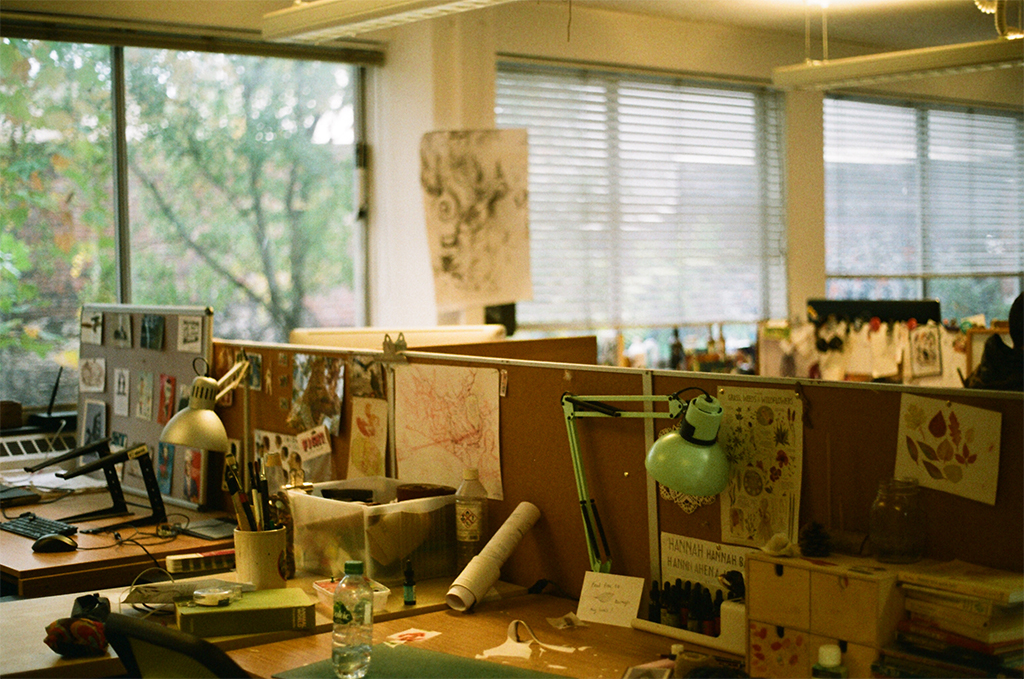 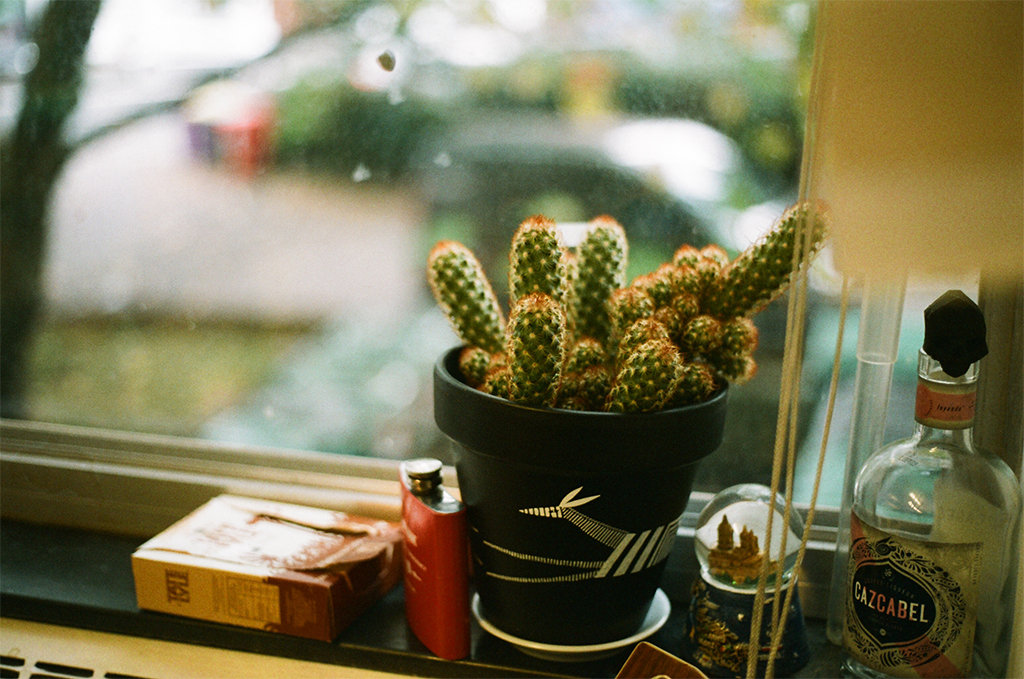 When did it all start for you as an Illustrator?

From day dot really.. Because both my parents are illustrators, them kinda doing it for work. As a kid growing up I thought it was normal to draw all the time. I guess I kind of got a taste for it by doing it all the time and here I am!

Do you think your style is derived from theirs?

Yeah it’s a mixture of the two, because my dad is very intricate water colours, cross sections of planets and all this mad shit. My mum’s much more children’s booky, picture booky.

Is there anyone else you looked up to?

Its funny actually there is a girl in my studio called Freya Hartas. Her dad Illustrated probably my favourite picture book, it was a cross section of these apartments, its like a day in the life of these apartment blocks, his name is Leo Hartas. He’s like really intricate but a lot of humour in it. So it’s kind of a coincidence that I am sharing a studio with his daughter now.

So how did you end up here?

Bristol! I don’t know… I did want to come and study Illustration here but didn’t get in. I had a few mates that did and I came and visited them and never heard a bad thing about it. So I thought I would come down after Uni and try it out.

So you have started writing your own stories now?

Big time. I have always had stories in mind. But I don’t write well. My mate Brook Tate, I have given him my stories and he has re-written them. It’s a really good combo, so I kind of have a writer.

So what’s the aim?

I don’t know, maybe be the next Roald Dahl haha. So he writes and I draw them and we will see where it goes. But it is such a ball ache trying to get stuff published, it takes so long.

And how is it working with a writer, or a publisher? Do you tend to get creative freedom of what you want to…

Ah it totally depended on the job, like some publishers are really good, some are a bit more… they know what they want. And same with the writers, which all has its upsides and downsides – like if they know what they want you can kinda bang it out quickly. Whereas if they’re a bit loosey goosey you can be more creative but then it just takes longer because it’s a lot more back and forth.

Ok yeah, we were wondering how the atmosphere in the studio upstairs compares to how it was like at uni?

Haha it’s funny, I feel like, I finished uni years ago but I’m still in that kind of environment – you just wake up late, wonder in and there’s lots of other creative people in there and it’s all very chilled and stuff. I worked back home after uni for nearly a year and it was kind of a bit gollumy, not very good for the old social skills and for the old artwork – so it’s really nice having a communal space with other creatives.

Yeah, yeah definitely yeah. It’s such a creative place and it’s small enough that you see familiar faces in familiar places, so you have more of a community feel – you feel like you’re gonna work with people again because you’re gonna see them again. It’s not a big faff to go and see art, go and see an exhibition, life drawing, because it’s all within walking distance, and yeah it’s just a cool arty place.

Your process, so from what it looks from what we’ve seen you hand-draw most things then digitize it or just go straight in to working digitally?

I’ve slowly gone more and more and more digital, um, to the point where now i basically do it all on the computer. But I used to do a kind of pencil drawing then scan that in, colour it, but now it’s pretty much all digital. But I don’t know, I dabble about.

So, when did you come up with Trevor the Troll?

Uh, um, a few years ago, uh it’s a character my agent quite liked and said “oh do you wanna do something with it?” and I was like uhhh yeah and kind of came up with this new story  and then Brooke, my mate Brooke liked it and sort of, re-wrote it and now we’re sort of, we’re redoing it all and kind of getting it back out there.

Are there story picture books you had as a child that are particularly influential?

Yea! Like that one I was saying about that Leo Hartas one and it was a really nice kind of one, it was kind of relaxing to look through it because there was so much to look at and it was so it was just, yea, after a long day of being a toddler it was nice to kind of chill out with your favourite picture book.