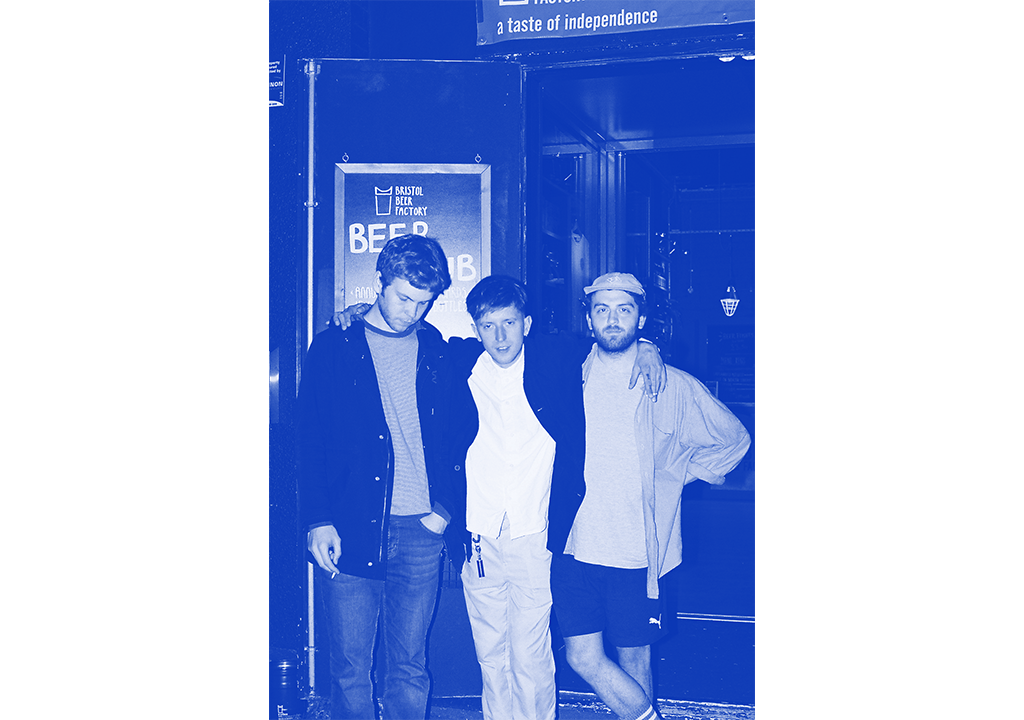 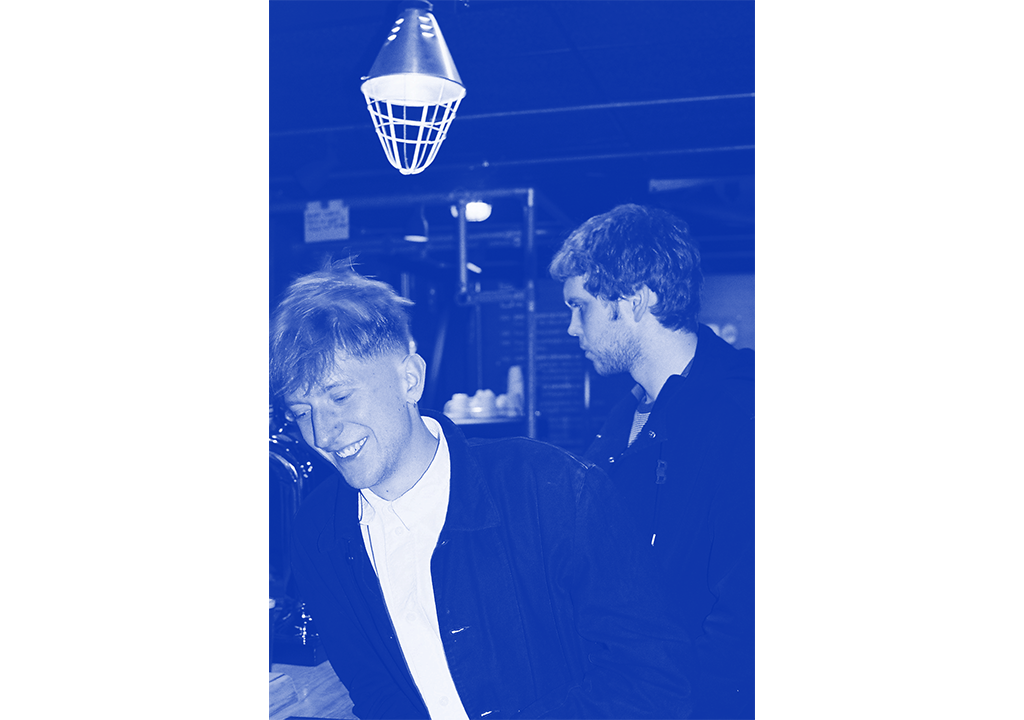 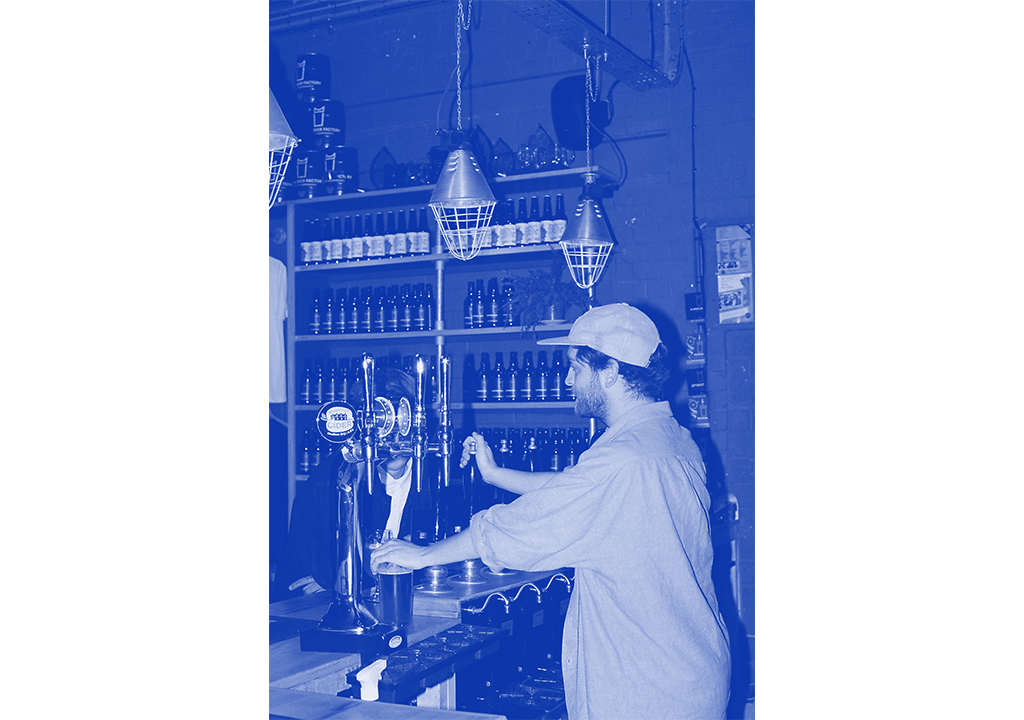 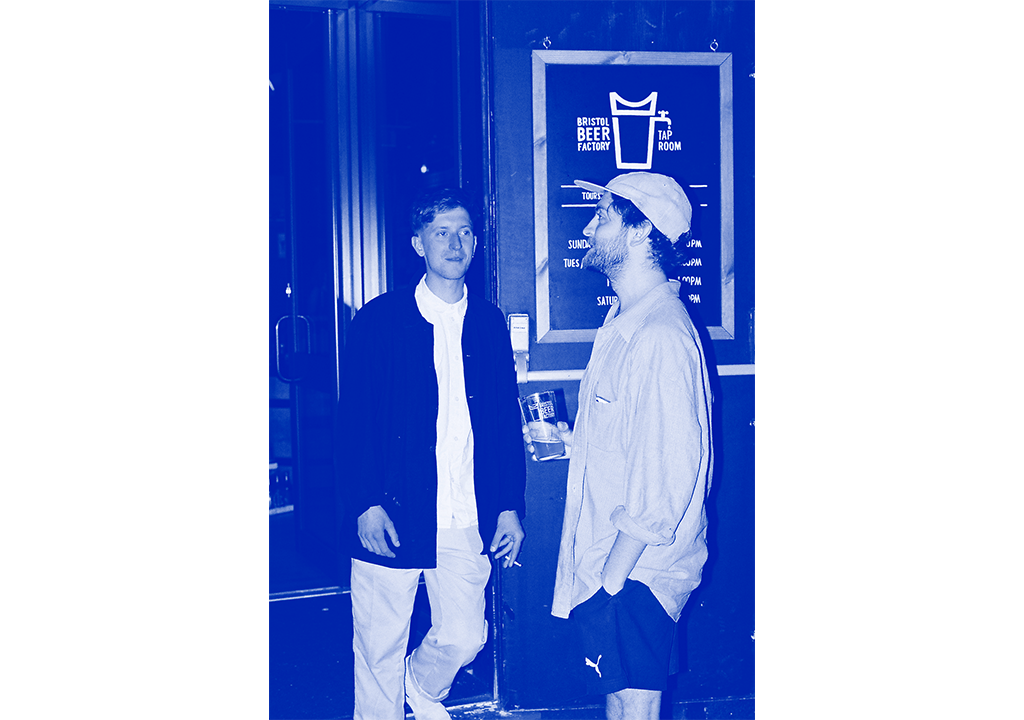 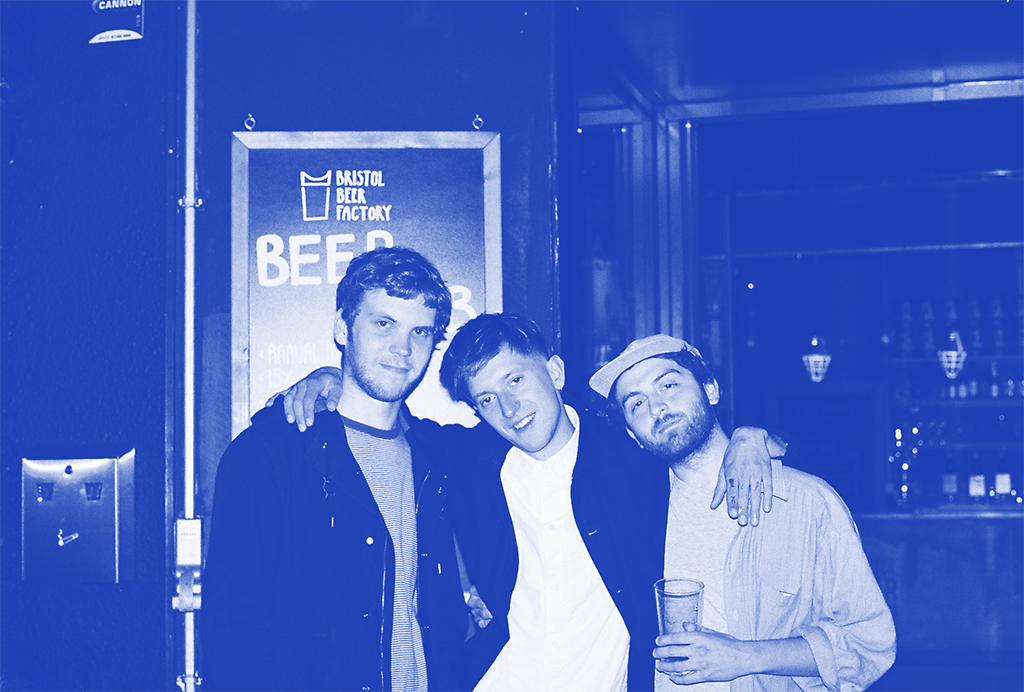 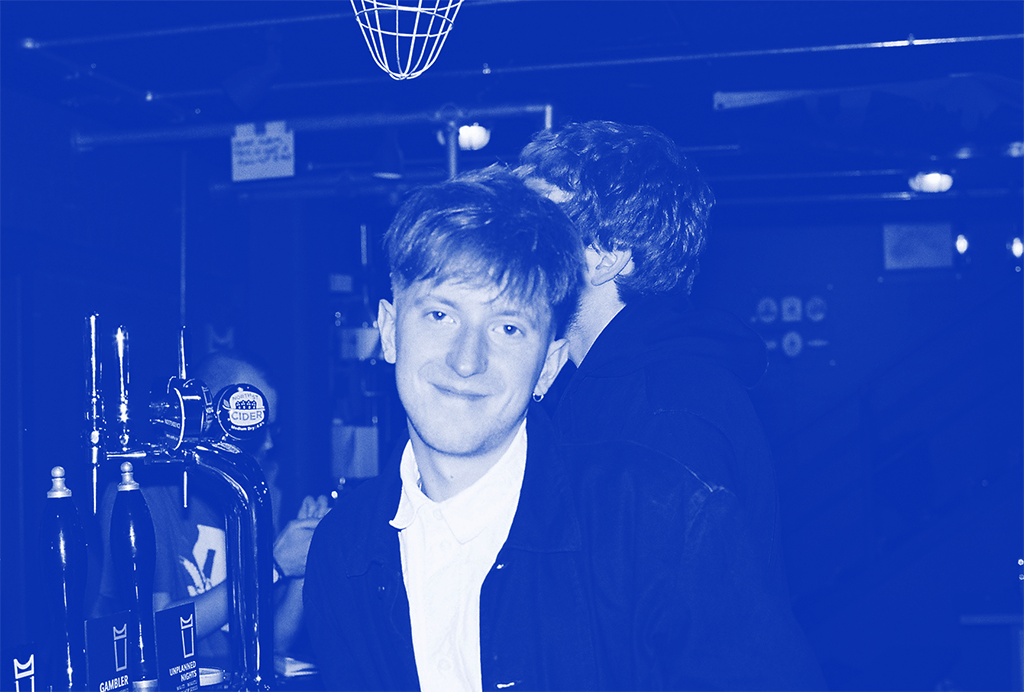 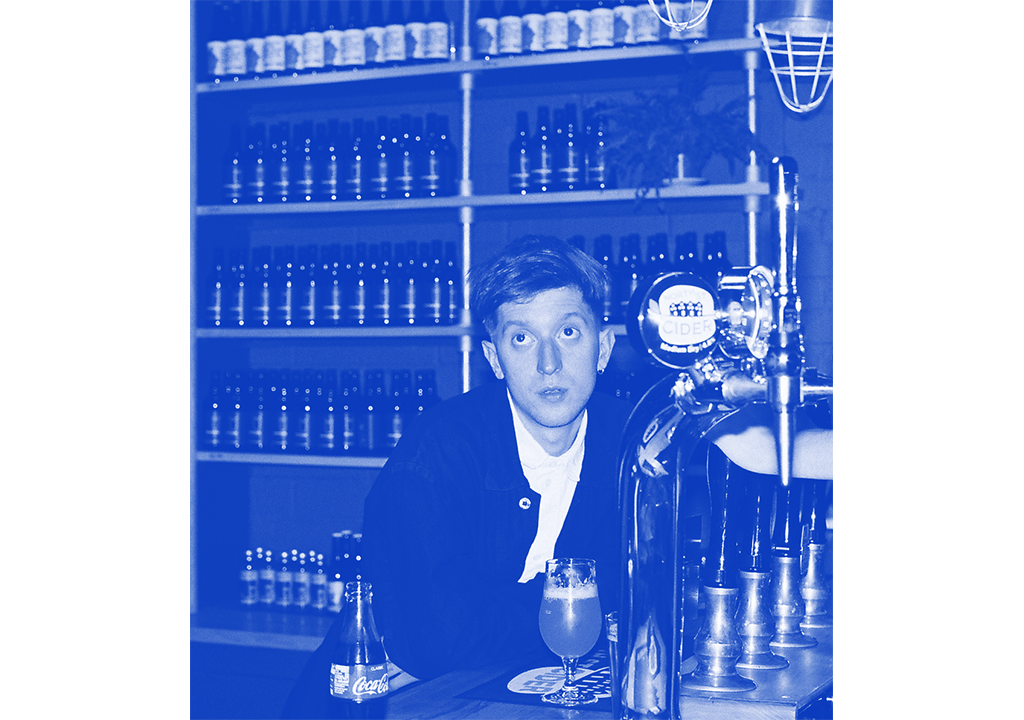 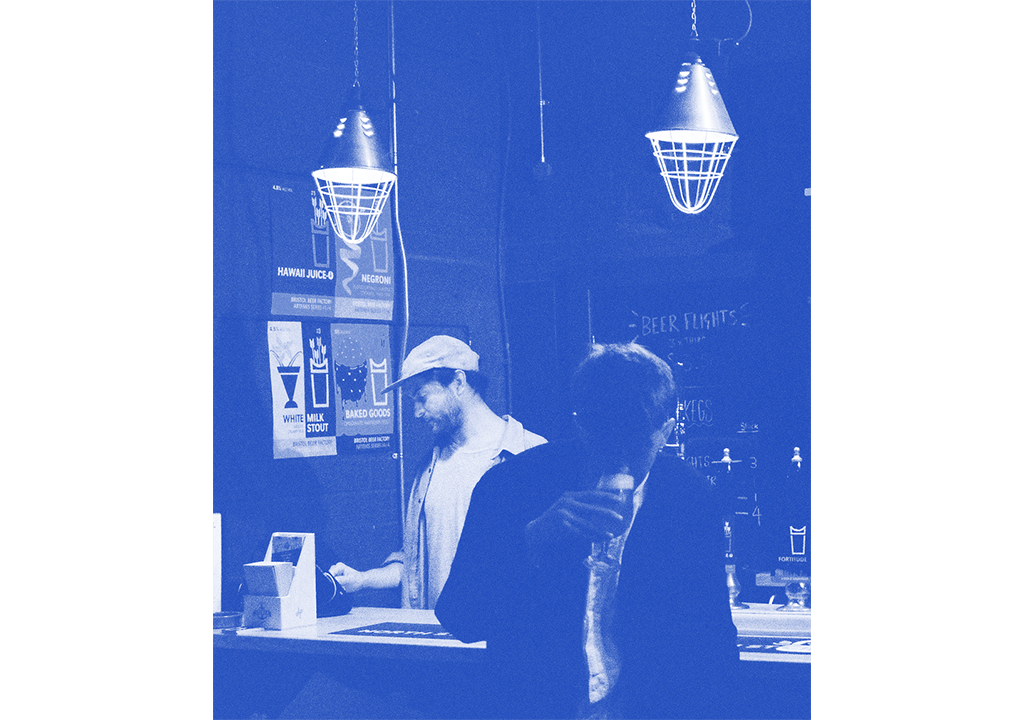 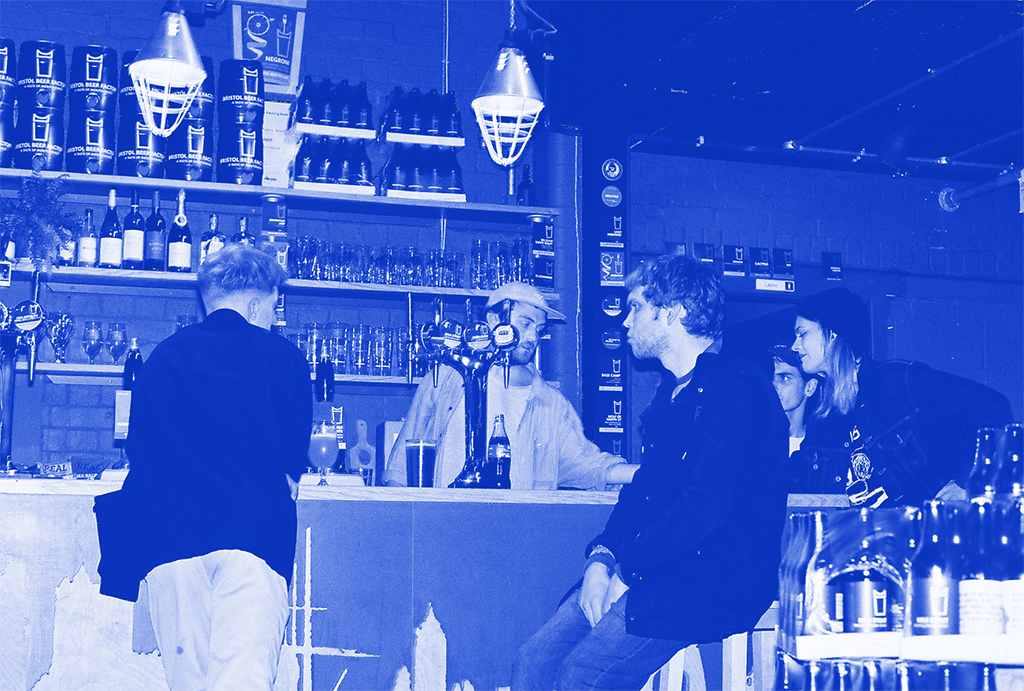 Do you find it more comfortable playing in Bristol compared to other places in the UK?

DANNY – People don’t just fold their hands and stand at the back which happened a couple times at London.

DANNY – It’s like “oh shit they’re not The Fat White Family why are we here?”.

OLI – Hastings is the worst gig we’ve ever done, no one was there and there was a smoke machine in the background that was pointed at the crowd and that just puffed balls of smoke out which just lingered in the empty space in front of us which just looked like we were in a room on our own.

JAMES – It was not cool

OLI – It was also really loud, you could hear the balls of smoke over the sound of us which isn’t what you want.

Do you feel like you’ve got influences on the live shows you do?

OLI – Most of the time I’d say it’s generally what not to do though. Like we don’t normally go “Ah that guy was really cool” whereas we’d say “did you see that fucking prick dancing about?” all that kind of stuff. “That guy looks awful, they said something stupid” like we’re not going to do that- that’s the influence.

JAMES- Sounds so depressing, we have to find what we don’t like.

DANNY – We do see things though even for example I know people always talk about IDLES and I’m sure you’re going to ask us about IDLES at some point- you’re definitely deleting the questions as we speak- but for example seeing the boys play in Boomtown we were like “fuck, holy shit, that’s a set” but obviously we do things very different.

Do you plan the shows at all?

DANNY- Song number three- you go to the left and I come up behind you and jump on your shoulders and THEN we have an embrace and THEN you go into the crowd.

JAMES – Although maybe it is good if we have a cue.

DANNY – Don’t let the public know. Can this be off the record? Only joking, it’s already rolling.

JAMES- We’ve given away too much.

DANNY – Put it in anyway no one knows who we are anyway so it’s fine.

JAMES – Are you that guy from the IDLES song?!

Do people ask you about that song (Danny Nedelko by IDLES) all the time?

DANNY – In Thekla before we go on they actually played Danny Nedelko, we thought the venue manager was winding us up because there was obviously someone at the back who was saying “oh look it’s Shmammy Sheshmelko”.

Do you have creative differences and how do you resolve them?

DANNY – We don’t talk about them, just never talk about them and then not speak to each other for a couple of days. Eventually we’re all going to have a massive brawl between ourselves.

JAMES – We just bury them.

DANNY – I think we have creative differences because everyone is deeply passionate about the band so sometimes we clash but it’s mainly because we love what we do and we’re really proud of what we do together. Any clashes aren’t because of dislike of each other it was mainly because everyone feels so passionate about what we do. What band doesn’t have fucking clashes you know what I mean? A band that doesn’t have clashes is a bad band.

DANNY – Then you’re just always bad all the time.

OLI – That band is pure, riding that sweet Coldplay wave.

JAMES- That should be the album- Coldplay wave.

Is it a good or a bad thing that Bristol is saturated with creatives? Obviously there is a bigger network but does this mean it’s harder to get noticed?

OLI – Music wise, I don’t think there’s a big unity, in terms of graphic design or any kind of design there’s a lot of people. Sometimes I don’t understand how people don’t know that they’re doing the exact same thing as everyone else. In terms of the economy that is a problem, it’s become oversaturated to the point where people start moving out of the city because they can no longer afford to live here. So you’ve got bougie bullshit kind of stuff, people we know try to buy houses are now having to live fucking miles away. It will eventually dent the city.

DANNY – At that point we’ll 100% have massive studio paychecks so we’ll be above that.

OLI – All the really shallow stylised people that are in the centre will ruin things, there’s going to be no scene because everyone has to move away. Gentrification will destroy what goes on in Bristol.

DANNY – To be honest though it’s still amazing, having so many creative people around.

OLI – Up north things are way cheaper, like yeah you have cool things in Bristol but it feels like the cool things are a bit too cool. Like why do we have to spend that much money?

DANNY – But at the same time people up north are all saying that it’s all happening in Bristol- grass is always greener. But Bristol is the best city in the world! Go Bristol! After Robins. Football. City grounds is just around the corner from this interview.

This is all going in by the way, every single word.

We’ve got our IDLES question. So you often get associated with IDLES, does that annoy you? Do you hate them?

DANNY – Not at all. The boys have been really close friends of ours for years. We love them immensely, obviously there’s a joke and we get compared to them loads being from the same city. They’re the best fucking five guys in the world and we love them and we’ve known them for such a long time, and it’s so amazing to see them succeed and we’re so grateful they asked us to go on tour with them. The boys are the best.

DANNY- Oli’s known them for years, I’ve known the boys the years as well and…

JAMES – You’ve known them for years? You’re friends with them?

DANNY – I’m absolutely friends with them. James doesn’t know any of them, James is from Milton Keynes that place is really weird.

JAMES – Mate I’m just all about the music.

DANNY – He used to be in a ska band, he just loves ska more than anything. He loves to play without the pick and we’re like “mate if you want to play you have to play with a pick” there’s none of that travelling basslines anymore.

JAMES- I just do what I’m told now.

DANNY – Of course we get compared to them, we’re going on tour with them, they’re our friends.

OLI – Being perfectly honest with them, the thing is-

OLI – The only thing is that-

DANNY- Oli fucking hates that band so much

OLI – The only thing that is annoying is people thinking we’re not mates like sometimes I’ve got the idea that people think it’s more like we’re another Bristol band and they’re doing us a favour. It’s not like that it’s because they’re genuinely our mates.

DANNY – Perhaps people just assume that they’re taking us on tour only because we’re mates but if you know any of the boys, if the band wouldn’t be good in their eyes they would never do that. I think they like our band. I might be wrong. Maybe they’re doing an interview right now about how they hate Heavy Lungs and they really regret taking us on tour. Loads of other bands asked to go on tour but apparently, we made the cut so suck it.

OLI – We love them but we are going to prank the fuck out of them on tour.

DANNY – This is off the record it’s just Oli’s opinion.

OLI – This is on the record. I’m coming for them. This is a warning, they’re not going to hear this until after the tour anyway. It’s a spooky omen.

An interview with Danny Nedelko, Oliver Southgate and James Minchall from Bristol’s experimental post punk band Heavy Lungs. In this interview we try to explore their stylistic choices; creative process of writing music; their experience as performers and their thoughts on Bristol’s music scene.