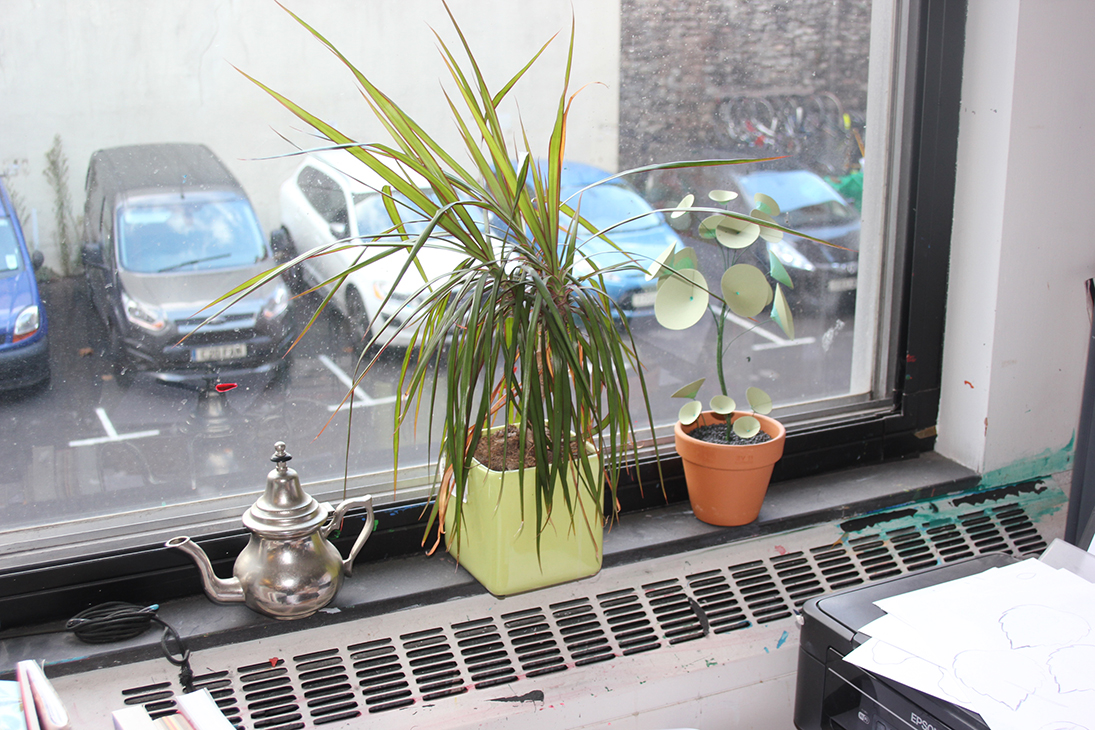 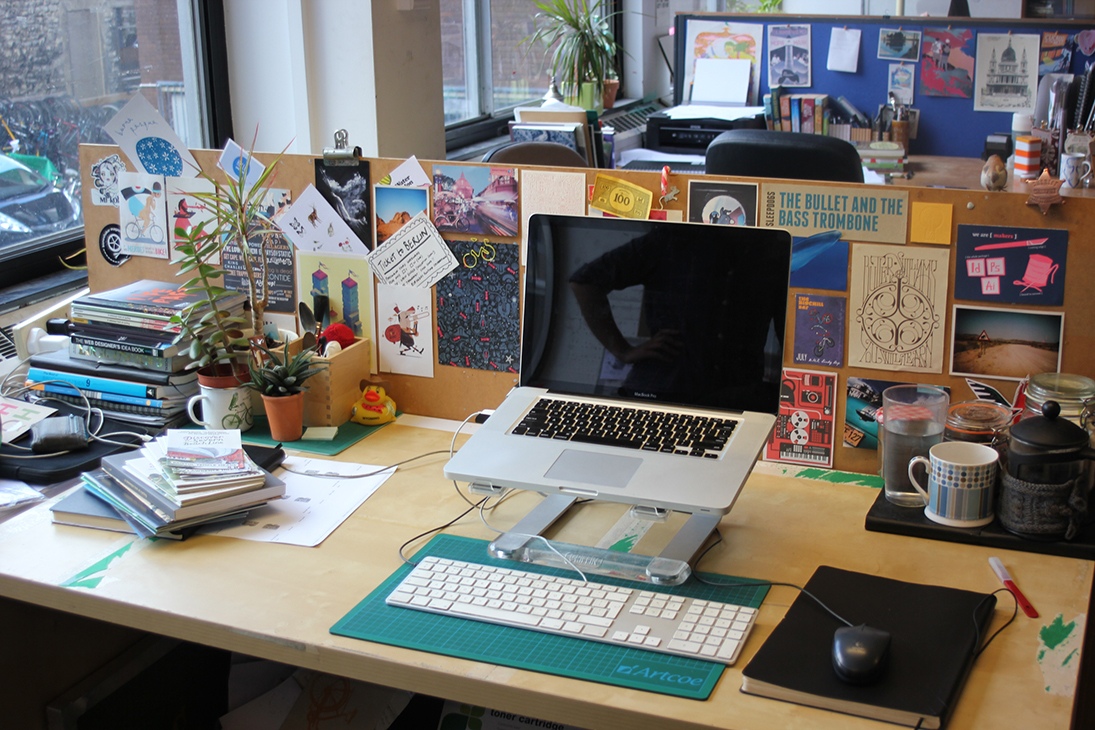 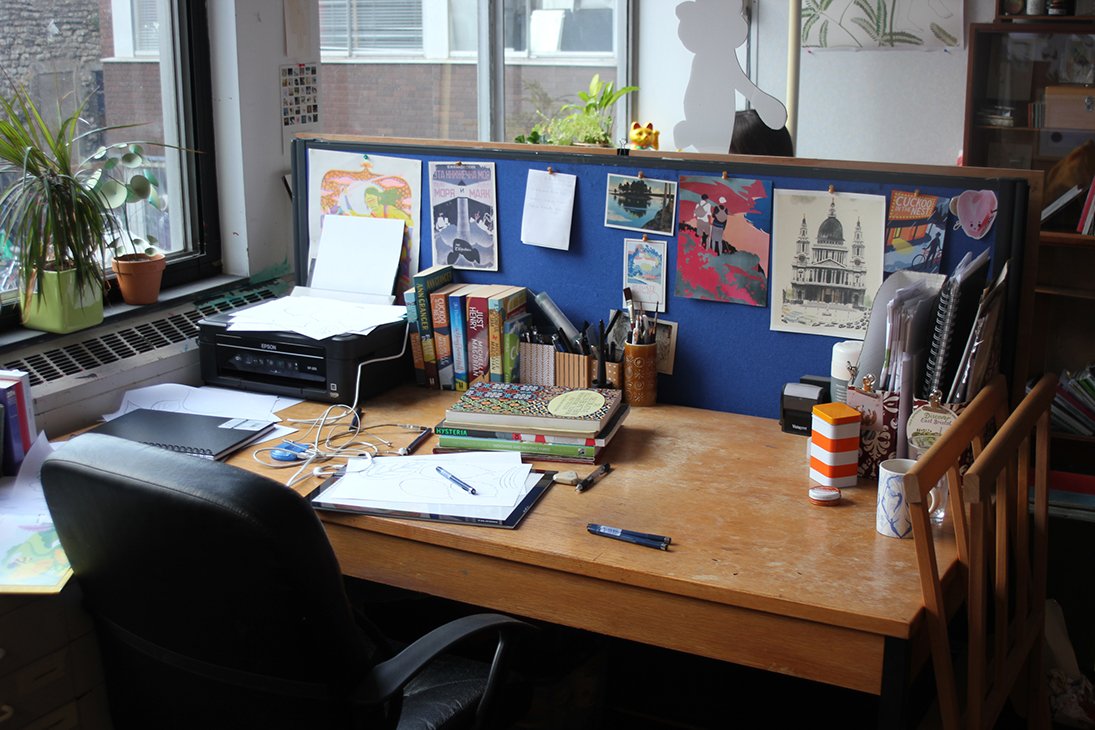 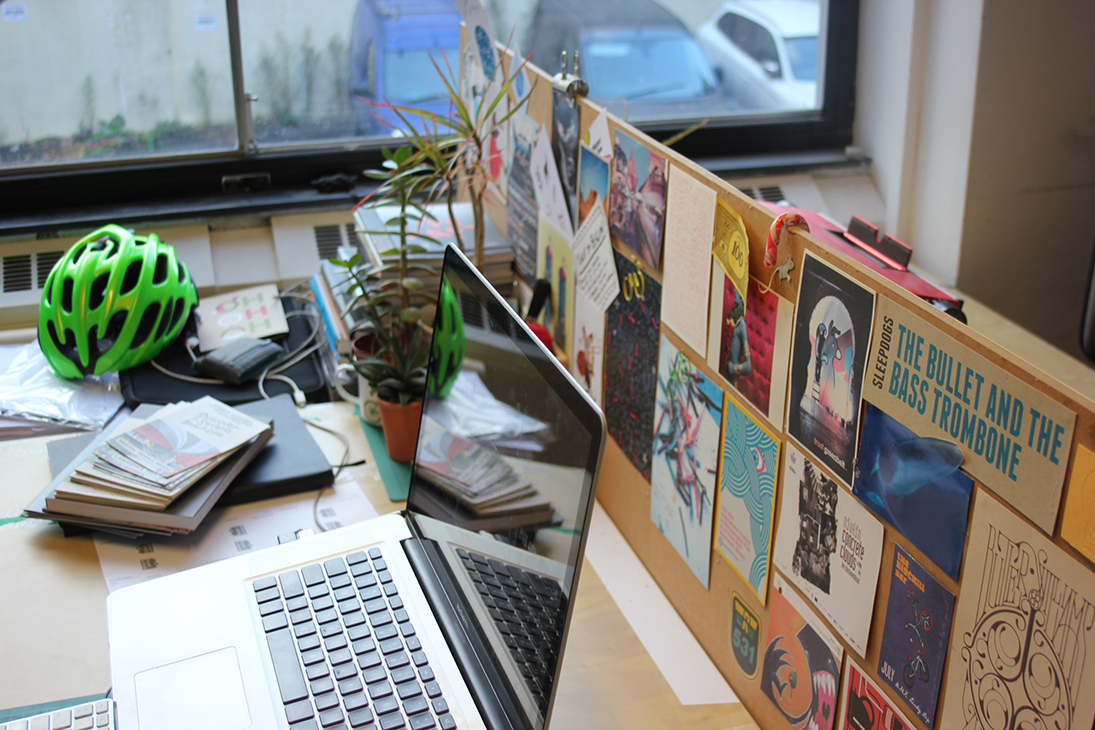 So virtually all of my paid projects are printed by a printer, the screen printing, I really enjoy it. It’s so common now to just pdf something send it to a printer and then it’s kind of like out of your hands and then it comes back printer. Like you have to approve the print but the actual creation process, you’re a bit disconnected from. Whereas when your screen printing, you get to see, and you actually get to see it with each layer as it comes together. So, in terms of being connected to the creation process, I really enjoy screen printing.

I only do it maybe one or two times a year, I try and do Christmas cards and then if I’ve got time for a framed print. But because I only do it one or two times a year getting my head into that different type of thinking – inks overlapping, obviously not being able to undo when it goes wrong, and a lot of my work is quite precise, especially being a typographer and working on editorial projects, we go through two or three stages to make sure that it is perfect. So then in screen printing where you can’t really be perfect and you can‘t really worry too much. Part of the joy of it is that it’s not perfect so you can see that it is hand crafted.

So it can be tricky to get my head around it and away from the computer and away from precision. But then actually quite a productive thing, I find it doesn’t need to be perfect.

Have you found since being in freelance it’s been hard to create your network with other creatives?

Being in Hamilton House has been an incredible way for that. I moved to Bristol, didn’t really know any one, for about 3 months was working in my kitchen, really struggling to feel connected to the city. It felt like I was working in a bubble because again my clients weren’t in town. So then moving here (Hamilton House), in a studio, surrounded by other people doing quite varied things, no one really overlaps with my work. I’m surrounded by creatives and having that influence and having those conversations that lead to more conversations. So that definitely helped.

I looked at a few other studios where it was a small stand-alone studio. But working here where there is 300/400 people all doing varied things means that you feel connected to a design illustration scene but also people are doing really varied things across the whole city.

Do you find it quite influencing to have other people around you?

I was working on a campaign brand in summer and for like a week/10 days and nothing was happening. I’d just gone really insular with my laptop and my sketch book and nothing was really happening, and then I had one half of a chat with someone else in the studio and it suddenly clicked. Like oh! If you don’t have those chats and you don’t get away. You need new influences coming in to spark new ideas. And you need those conversations otherwise you end up going round and round rather than moving forward.

Even just being surrounded by other people working, and the vibe that you get from creating work, encourages you trying to plod along.

In terms of your design process, what are the steps that you go through?

In terms of creative process, it always starts with narrowing down the brief. I get a lot of briefs that aren’t briefs, they don’t quite know what they are after. “So we need this”, and I think well have you thought about what you’re after,  is that really what you want? Especially working with the charitable sector, they often aren’t that familiar with working with a creative, so it’s then working out what they are trying to say.

Or people who aren’t visual who are trying to describe something visual. Actually finding out out what they want or mean and what they’re looking for, or they want it to do and what it can’t do and then what I need to bring to the table. When you get there, you’re half way to completing it.

Do you have any other interests that influence you’re work?

So the obvious one is cycling, quite into cycling quite into magazines. The obvious way that that has affected my work is I’m now the Creative Director for Bone Shaker magazine. So, it’s bikes and magazine which kind of fits. So, I guess that’s an interest!

In terms of an interest that has the most effect on work, I would say it’s just through the magazines that I read, I quite like indie magazines. I really enjoy going up to Paper Smiths in Clifton, it can be a very dangerous place to go! Being inspired by all the different magazines that other people are producing.

It’s like when people have the same brief in a department and then come back with completely different designs. It’s like when you see the whole range of magazines and what people actually do with print I find it quite inspiring.

Who would you say out of people you have worked with or done a collaboration that is the most memorable?

In terms of a collaborative projects it would most probably be Bone Shaker, so there’s 4 of us in the team. There’s another designer who’s recently graduated from the City of Bristol College design course. There’s James Lucas who set up the Bristol Bike Project which is just at the bottom of the building. Then there’s Mike who is the main editor and as a team we are all quite different. Then we have 6 – 8 designers who will all each design one or two articles. So we don’t really have face to face meetings with them but we have a lot of contact over email. Especially the 4 of us in the team. I think if any of us were to do the magazine on our own it would look completely different.

The amount of things that in my head I think  won’ t work and I’m really not feeling it. Then through the meetings with James, Owen and Mike this article, this story will form and it will all come together, so that been a really fun process especially even more so being freelance.

Because with Bone Shaker we have weekly or fortnightly meetings when were all there. So actually it’s getting away from the computer and everybody will be throwing ideas around and wrestling with problems rather than trying to fit it on your own. So I think that would be the most memorable one.

What advise do you have for someone trying to get into the creative industry?

I guess find out what it is you want to do. I trained as a typographer and graphics communicator and I was really into publishing and I think having that specialisation definitely helped me. I know some people would say the opposite and they would say actually you need to be able to do everything but for me I felt really liking publishing and liking magazines helped as I could be like – thats going to be my thing and I could focus of that.

Be confident in your work and keep trying. Like you’re going to have to take a few hits.

Maybe that’s my tip, to learn to take the hits. Because even the best designer will come up against the client who doesn’t quite get their work. someone who will criticise their work and it’s not quite right for them. Actually the problem isn’t you, it’s the work, so maybe that one project isn’t quite right for it and coming back from that and not taking it personally.

Seeing it’s quite not quite right for that person, that doesn’t take away from your talent.

Don’t take it personally, which is hard because it’s such a creative process and you put so much work into it and it’s like your baby it’s like someone saying they don’t like it.

Chris Woodward specialise in typography and editorial design, and enjoy combining these to create magazines, books and learning materials.

With a background in communication design, he create designs that convey a message as effectively as possible; whether that’s a company’s marketing message, a charity’s vision, or a textbook for a language learner.