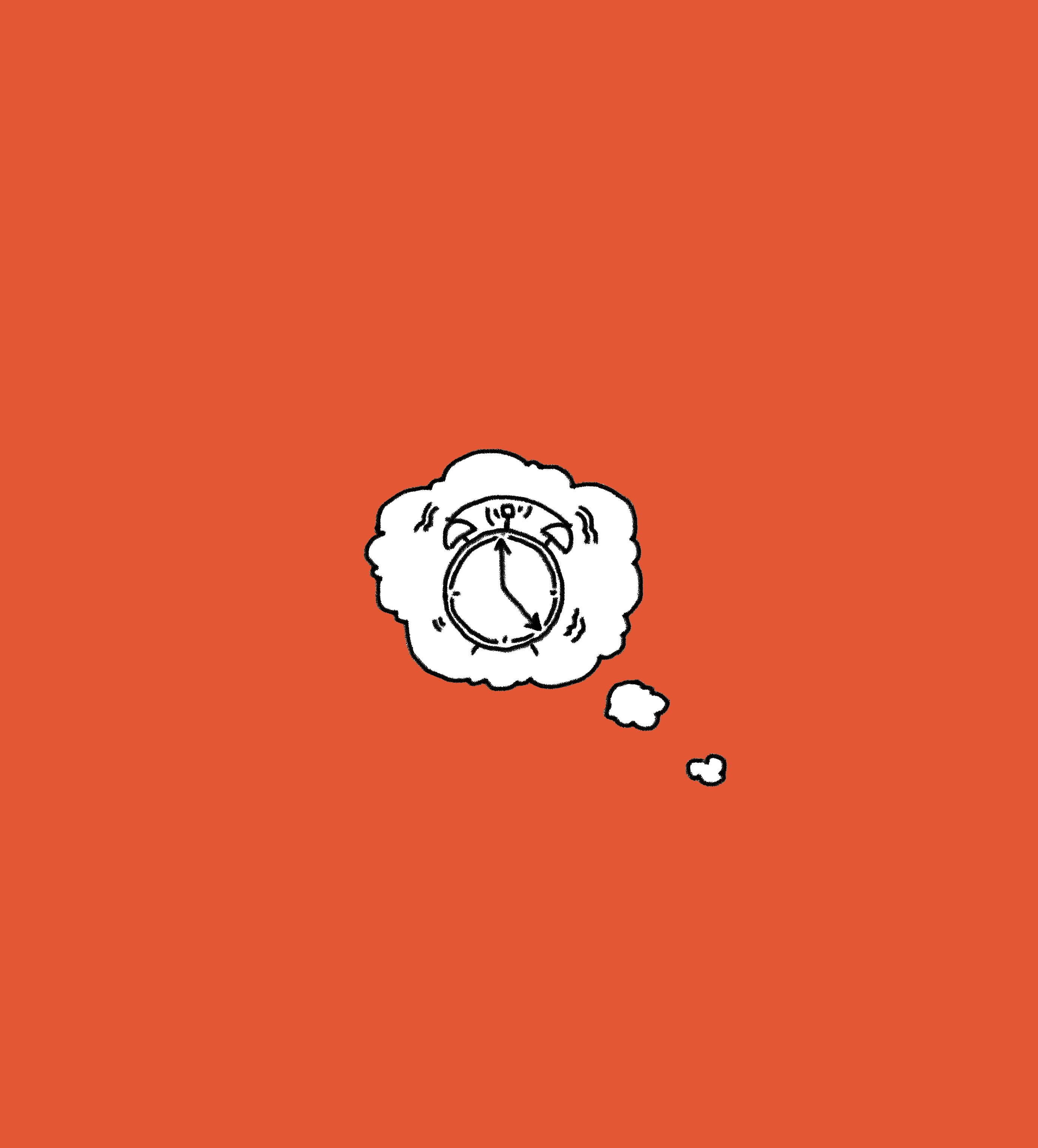 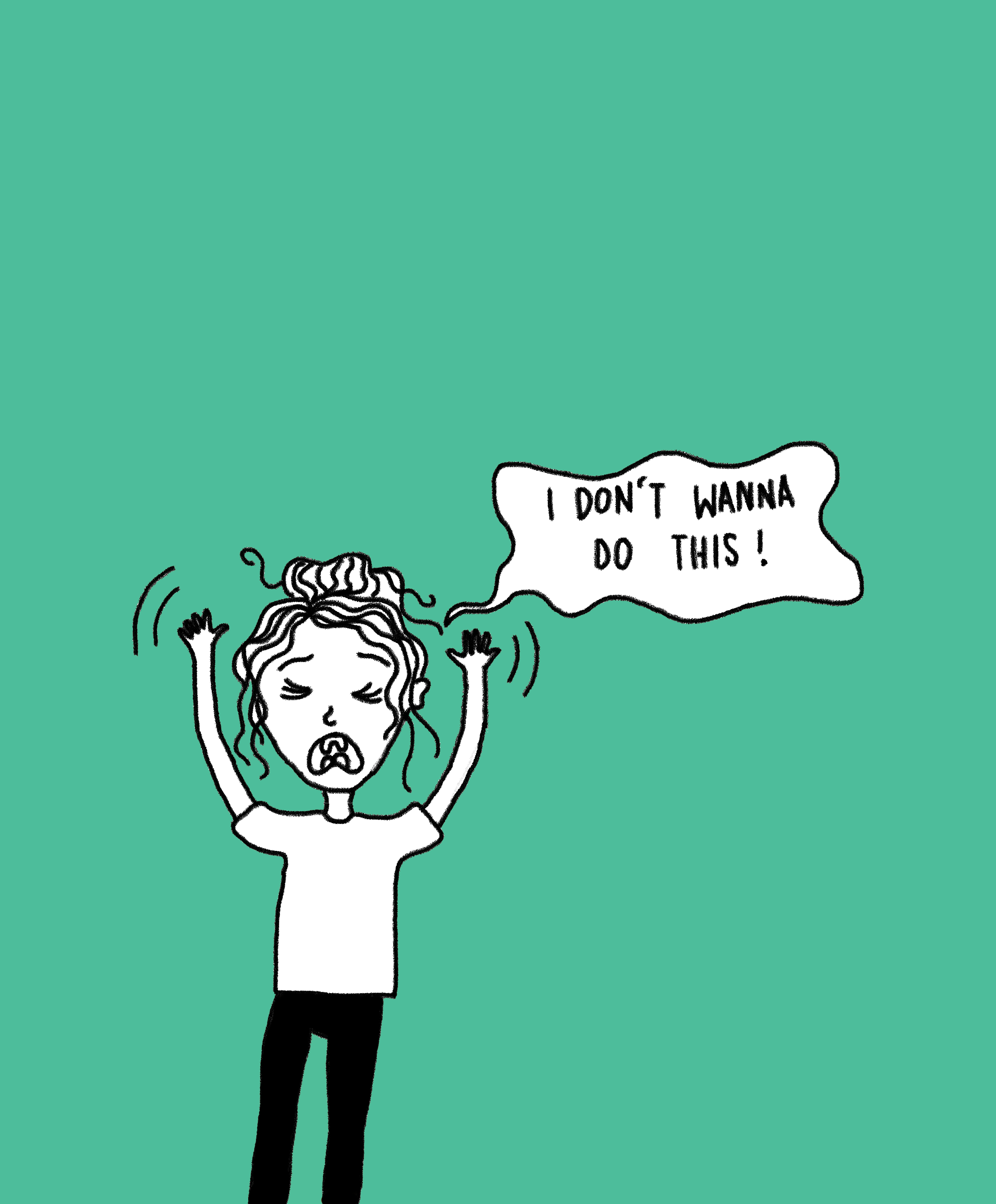 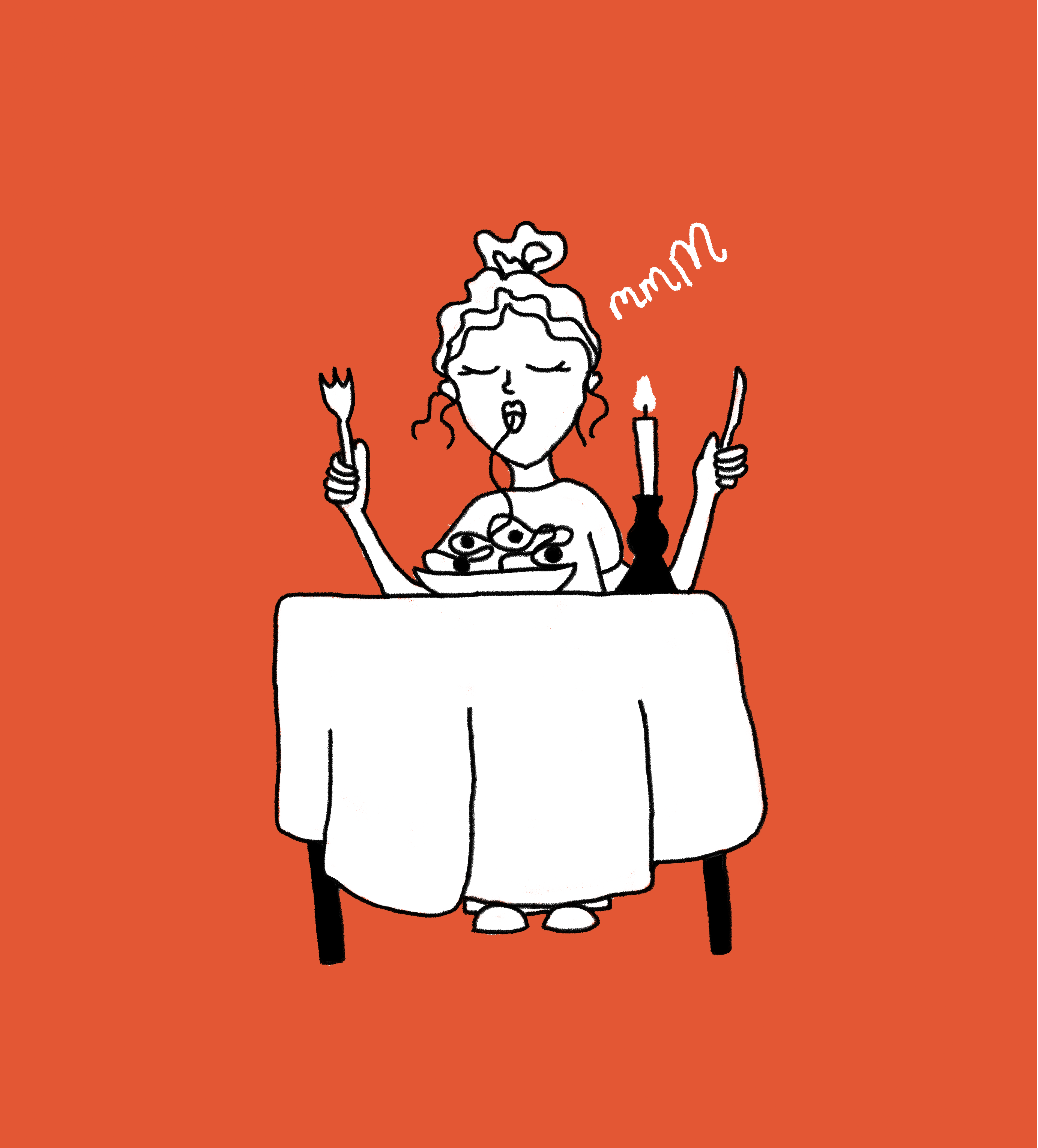 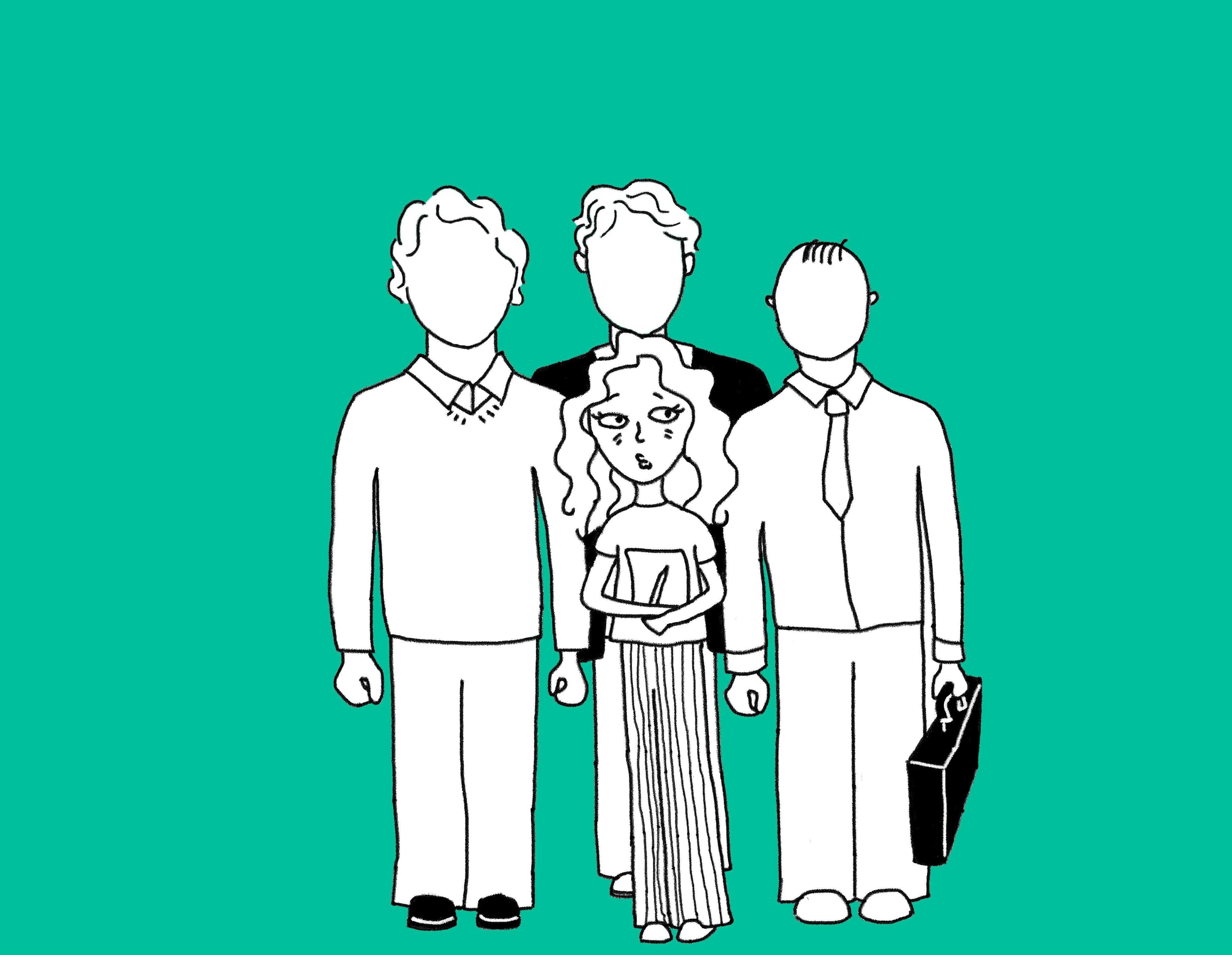 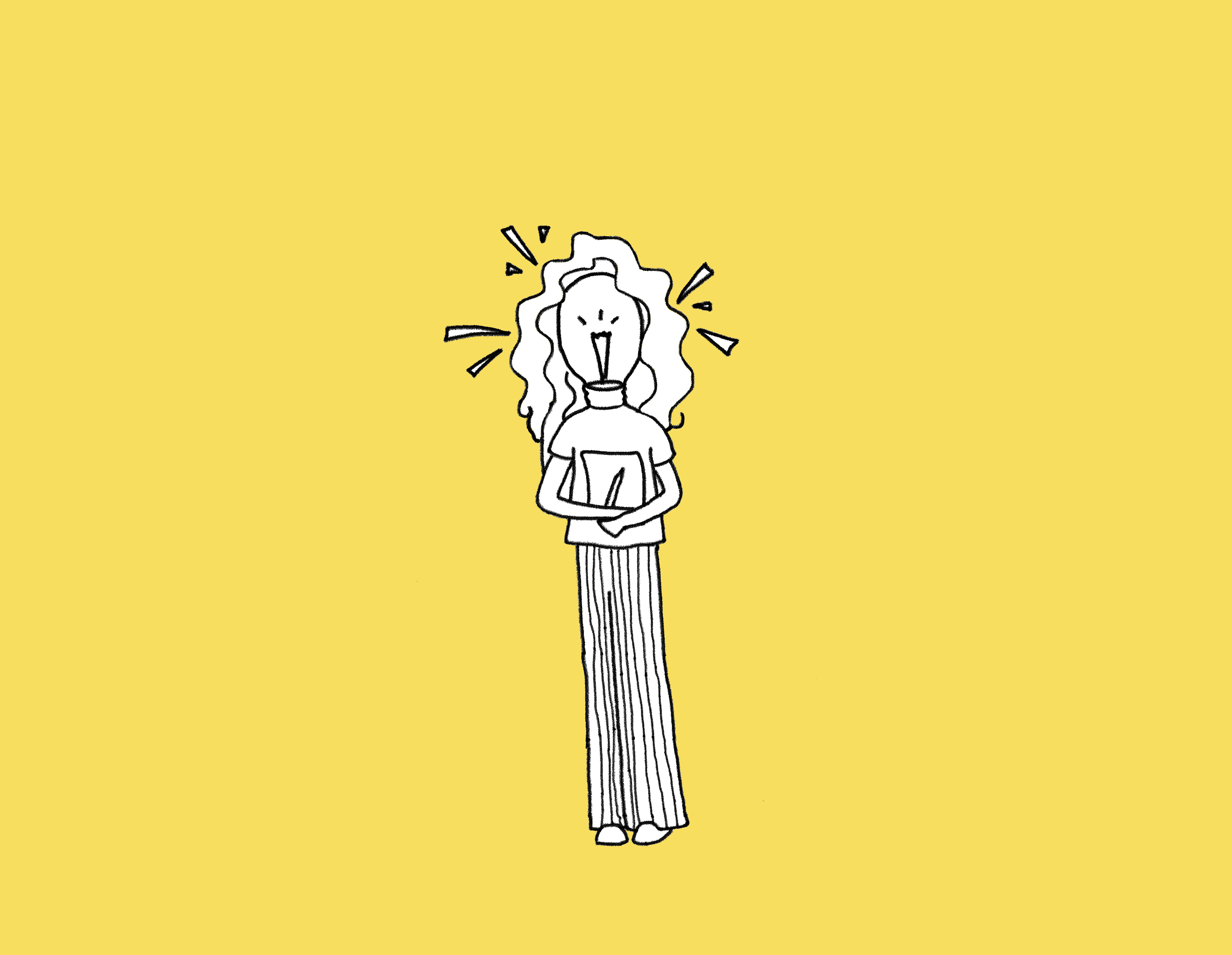 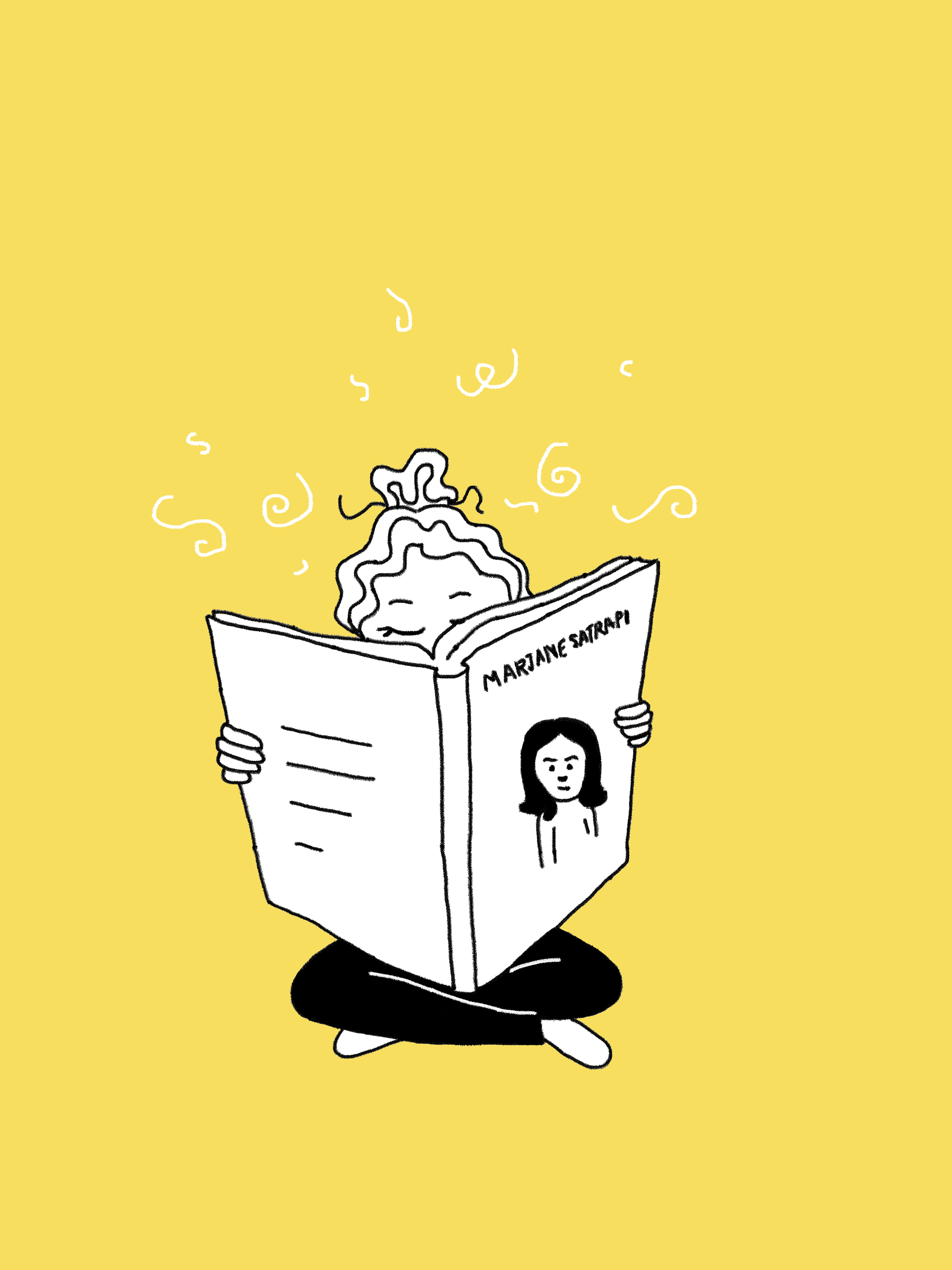 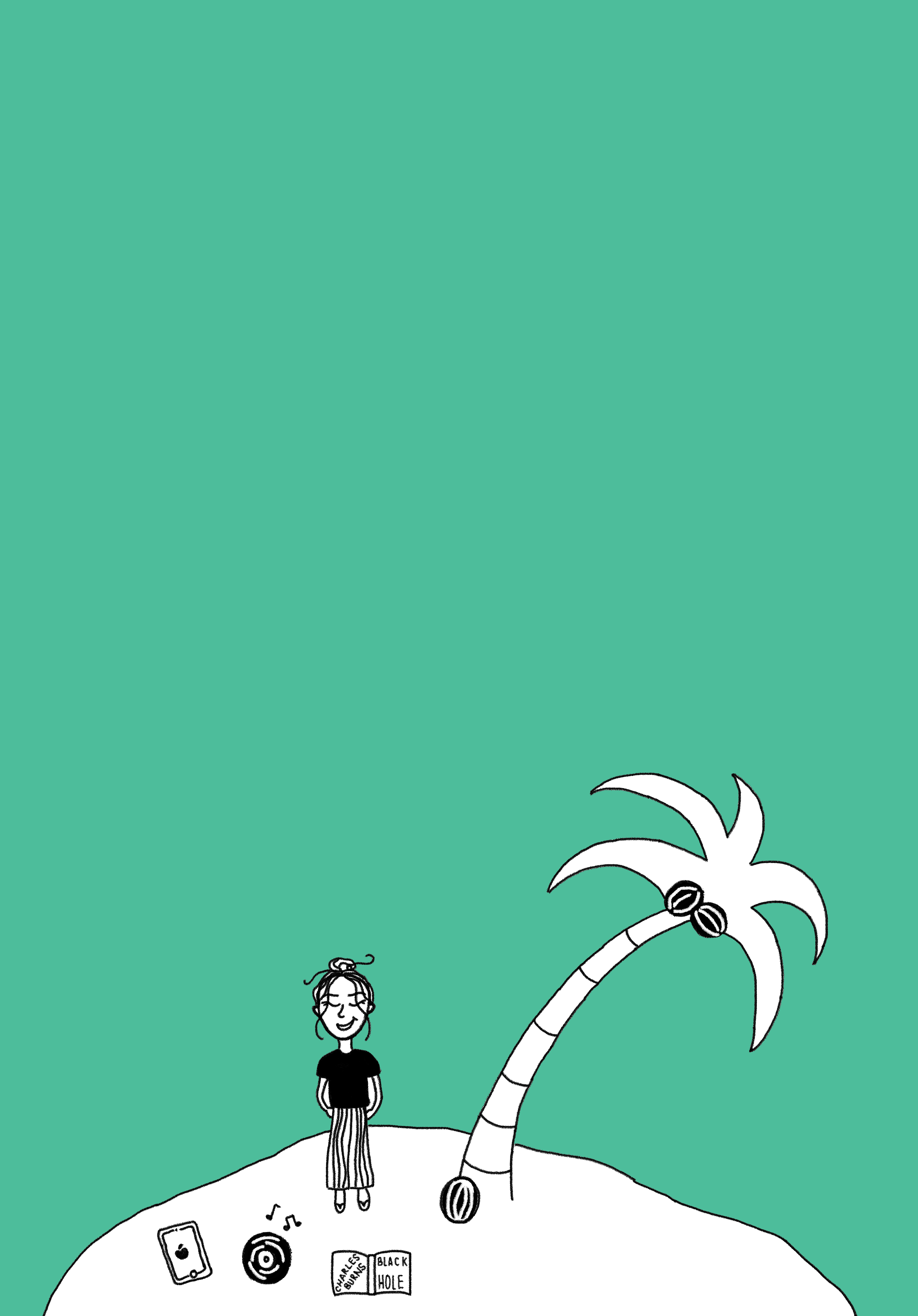 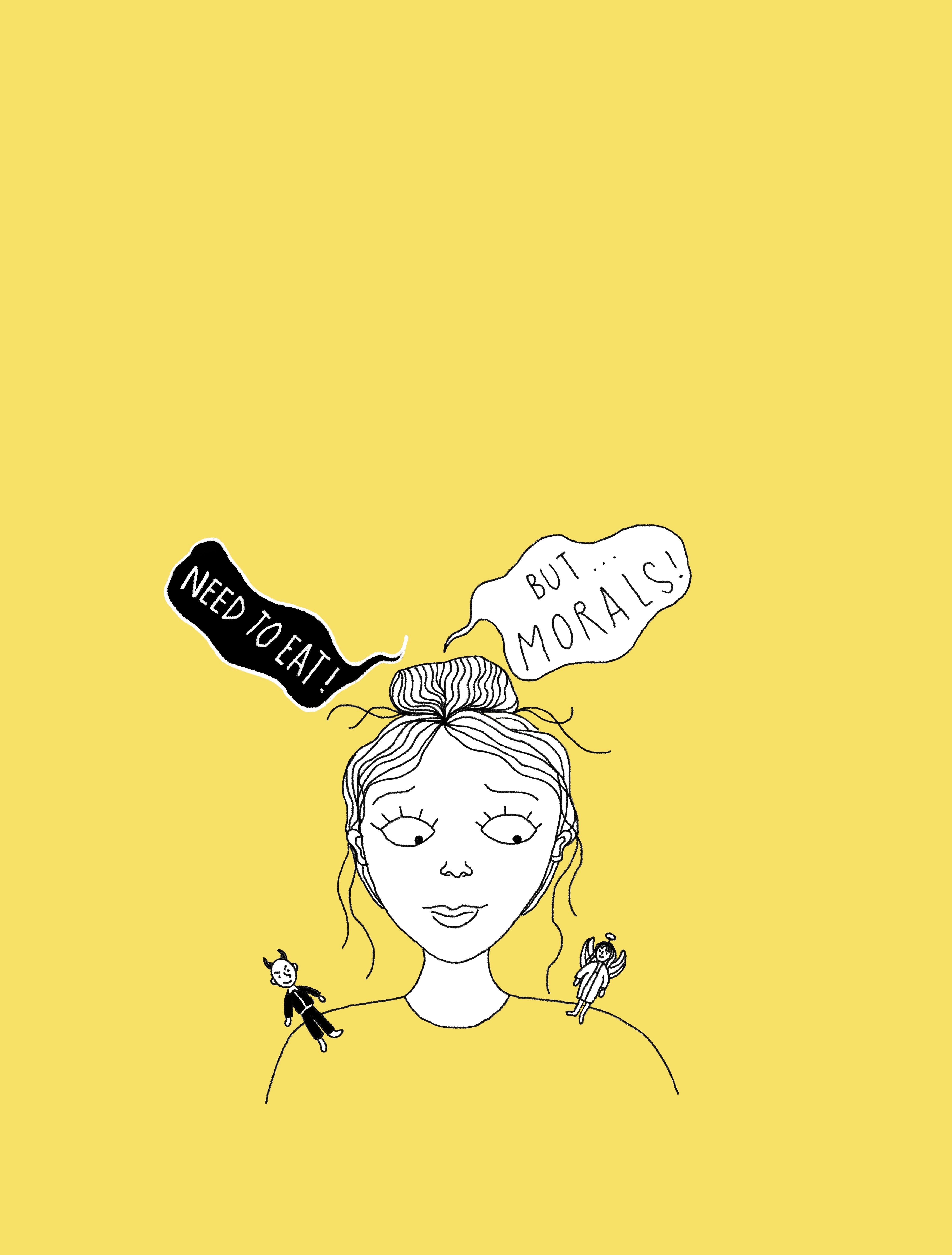 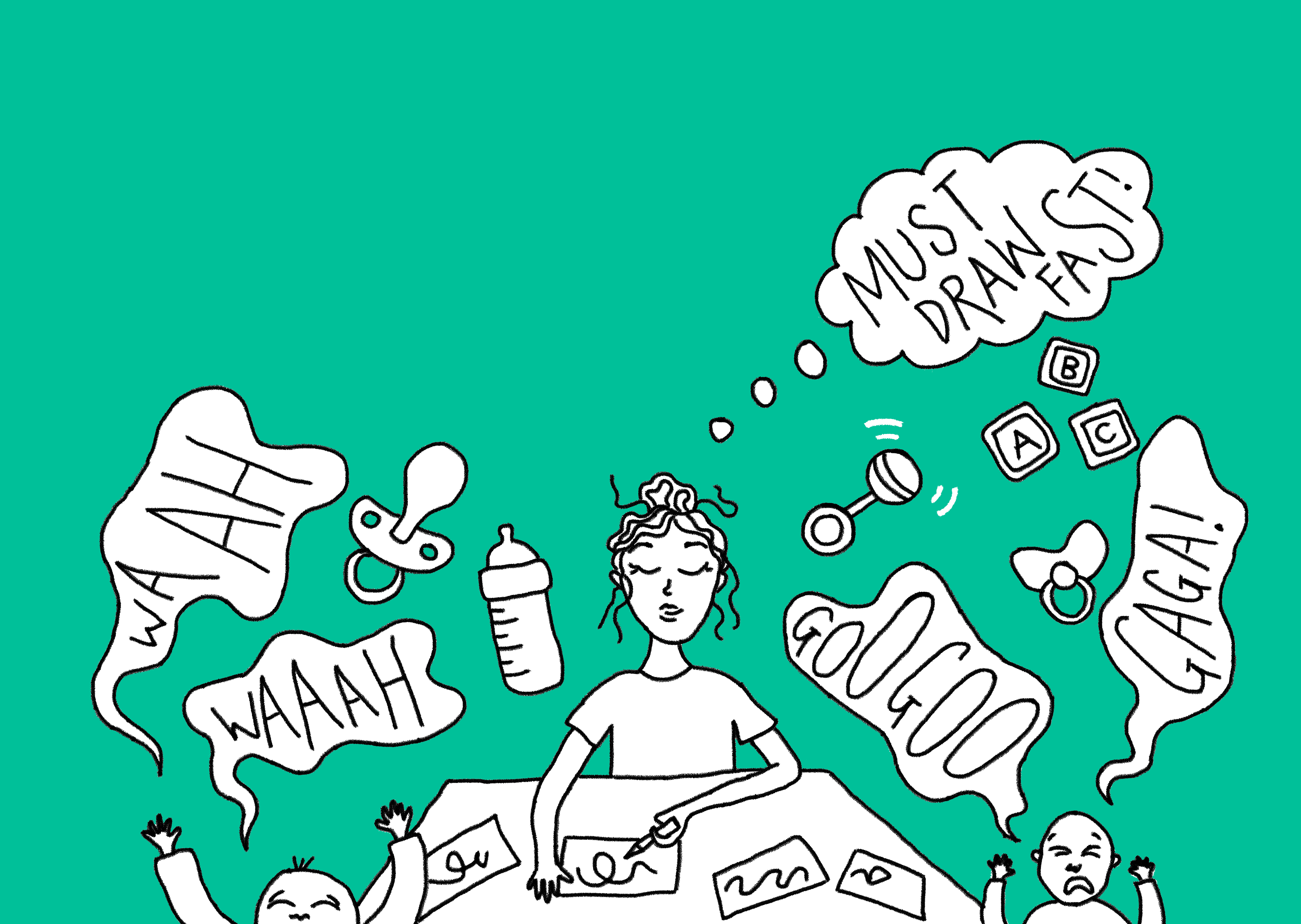 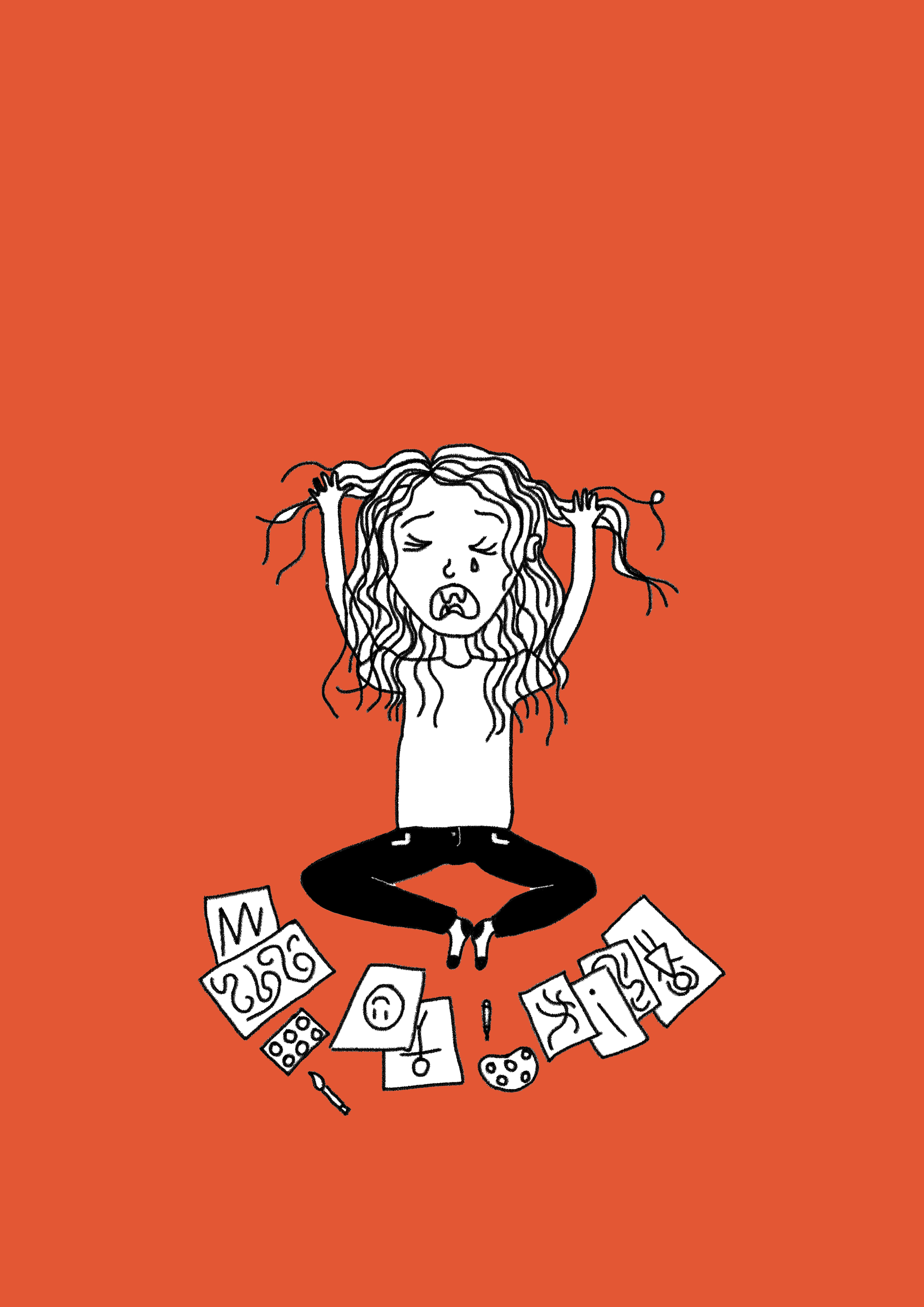 A friendly chat with Camille…

Camille Aubry is a French born graphic artist and illustrator. She studied architecture in France before studying illustration at Camberwell College of Art. Her work tackles social issues, and issues close to her heart, such as the struggles of motherhood.

We find it interesting that your first started studying architecture, at what point did you change to illustration and why?

I think it’s a bit of the other way round. So I’ve always drawn and done illustration and graphic novels since I could hold a pen, and I was actually following classes when I was little, like infant and I wanted to do a comic book for years and years. And then when it was time to chose something for Uni, I didn’t think this was a job. So I was like right, Ive gotta find something kind of creative, where I can draw but not kinda, you know like it has a title, a career. So I did architecture because I thought mmm, yeah and then it was fine, and then I did my first internship in an office and I was like I really don’t wanna do that! But I was like I should finish or it’d be a bit stupid, then I can maybe rewire.

What is your starting point and process when you get given a new project?

It depends what project. Obviously scribing is different from commissioned briefs. Scribing I try to not think about it too much because its meant to be like in the moment. But if its a subject I don’t know much about, then I tend to look on Pinterest. I don’t want to be too literate, so I am trying to do research, and how to personalise it. In terms if illustration, I think again I quite like to not be too literal, so ill work a lot on the concepts, and I will be looking at escaping a brief a but more, to kind of highlight some key words, talk about a theme, at first place they don’t have a specific meaning but they will make me think about it..

Where do you find inspiration from for your work, whether this be people, places etc.?

Anywhere. It really depends on my life situation, so at the moment my life situation is having two young kids, so I did a lot of books on motherhood the last three years, and a lot of projects with associations or organisations that deal with motherhood and children. Talking about motherhood, thats actually when I started drawing really quickly, because I just didn’t have time, you know I had a screaming kid over there!

Are there any specific designers or illustrators that influence or inspire you in particular?

For me, the first one would be Marjane Satrapi, she’s a very famous Iranian graphic novel artist and she wrote a comic book called ‘Persepolis’ and they actually turned that into an animation so I think… it’s not only the illustrative aspect of it, it’s the whole design of the novel. It was at that point when the movie came out, I was like ‘oh so women can do graphic novels’.

I think the difference in genders might also be a confidence thing as well when it comes to going for jobs?

I feel like, unfortunately, the divide comes later. If you try to have a family and things like that that’s when…it’s like when I was doing this architecture experience it was even worse. There is definitely an even number of people during studies but when you hit. 30 you hit that point where you make it senior and you’ve got lots of experience, but maybe that’s when people start thinking ‘oh maybe I want to try have children.’

Again, when you get older, you get like ‘Fuck this, im going to apply.’ I’ve hit 35 now and only just last year I had my second child and I just started thinking ‘oh you know what I’m just going to go for it’, and it works.

Obviously you get commissioned to do illustrations, but we were wondering if you did any as well in your personal time?

Yeah definitely, like, have you heard of Inktober? I’m doing Inktober right now. I think it’s really important as that’s also how I get work, through doing my own stuff, not waiting for other people to come. To you but by putting my work out there on Instagram etc. particularly because a lot of the work I do is protected, you know so I can’t always post it. So most of my Instagram is my own stuff, my graphic novels and illustrations for that.

You will never have so much time as you have now. What was I thinking 10 years ago when I was just getting drunk, you know, and partying or whatever. I was working lots, and I’m sure you’re working, but it’s just so important to find time, even if it’s just 1 hour a week where you don’t do any work, where you do your own stuff.

I think that’s important, trying to keep the love for what you do…

Do you know that book called the artists way? It’s a bit of a handbook but anyway, it educated artists to find their creative self and I can recommend it. It kind of teaches you to go back to what you really like. It teaches you stuff like how first thing you should do when you get up in the morning is just writing, well, journaling. Just writing whatever is in your head, it doesn’t make any sense but it doesn’t matter. Also taking yourself on a date once a week, like an artist date, go to an exhibition or go for a walk or whatever and then it helps you find your ‘thing’. Its so important to have these moments.

I guess its easy as an artist to be your own harshest critic and dislike your own work, would you say you do that too?

Yeah, I do that a lot. Even yesterday, I was working on a graphic novel and looking at chapters I’ve done and I’ve done it like ten times, and it was just a few months ago, so early in the project. But you have to learn to say no, now is not the time, I’m moving on and its part of the process.

A lot of your projects are centred around having a social message , do you feel its important for designers and illustrators to be socially engaged and produce that kind of work?

It depends what you want, but for me its completely connected, I couldn’t do one without the other. Sometimes when Im doing branding and illustration for companies I don’t necessarily agree with the political background of I’m torn because, you have to eat and also maybe I didn’t have enough commission that month and feel I need to do it. One time I was asked to scribe for an oil company and the pay was good but they were listed by the guardian as one of the 20 companies in the world that produce 30 percent of the worlds emissions. I didn’t get the job in the end because they didn’t want a scribe in the end but there are moments where you think, I have to eat and feed my kids but want to stick to my own morals. Doing this personal work or charity work helps with this. Its really important.

If you were on a desert island what three things would you bring, these don’t have to be design related?

Well they would be cos I need to do it, I would say my pens and paper but I would run out of ink, so if I can find a way to have an iPad and a thing with battery, that’s one, definitely that so I can draw, cos I’m not happy if I cant draw, I need to find a good book, and some music, its hard to choose one musician but I’ll say Young Fathers, I don’t think I could get bored of them so definitely them. No food because I’m kind of thinking I could eat leaves. And for the book, hmmm, Black Hole by Charles Burns (a comic book artist and another big influence of mine). I’d probably really regret choosing these over food but yeah those are my choices!