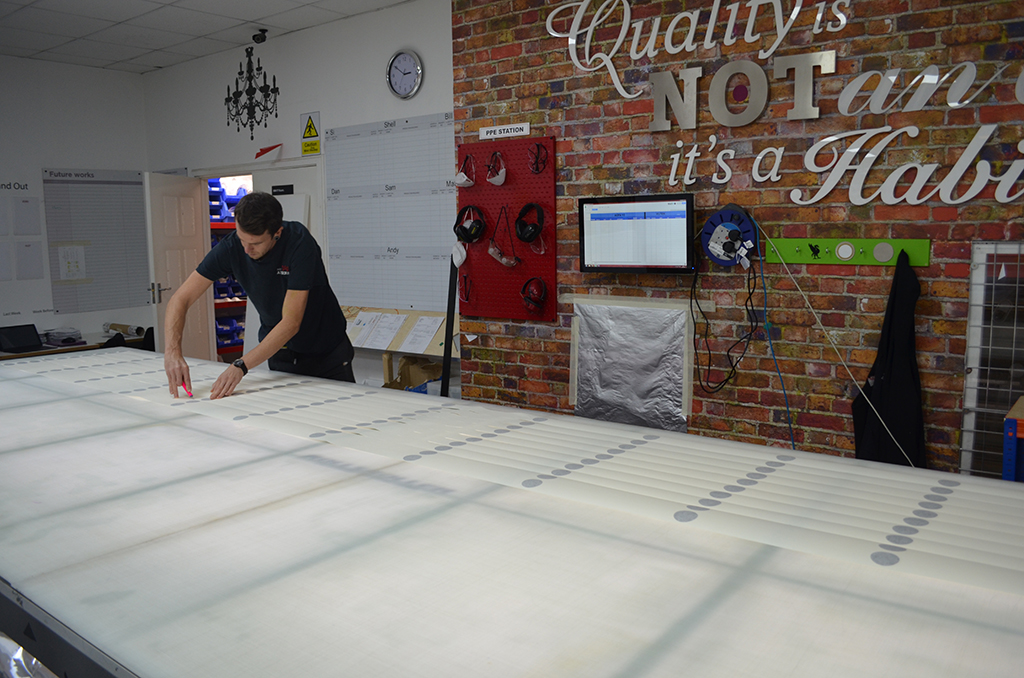 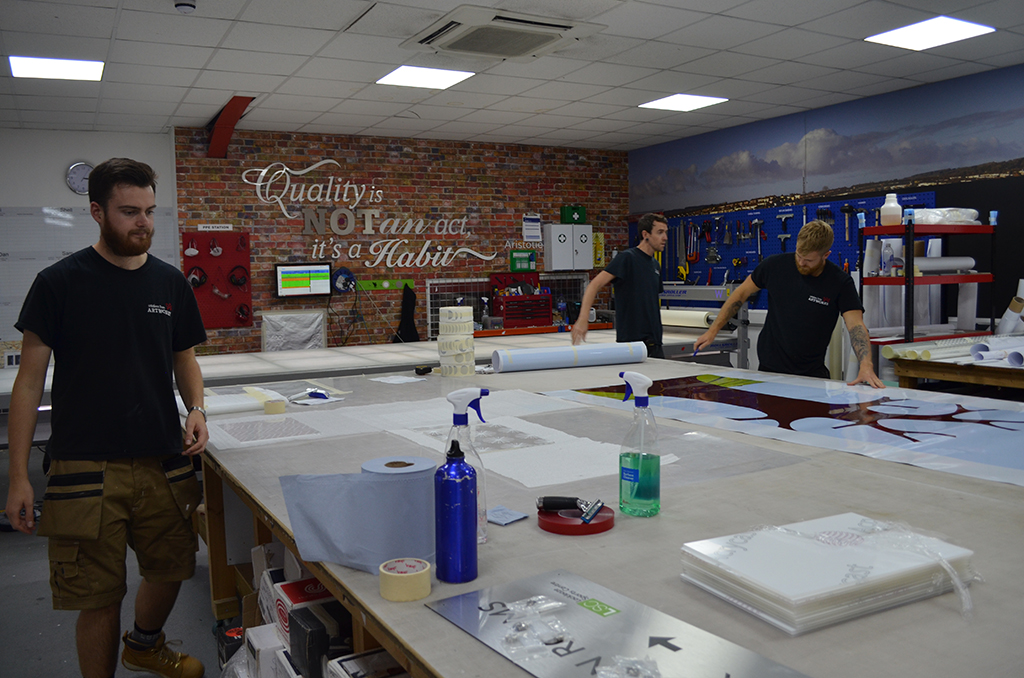 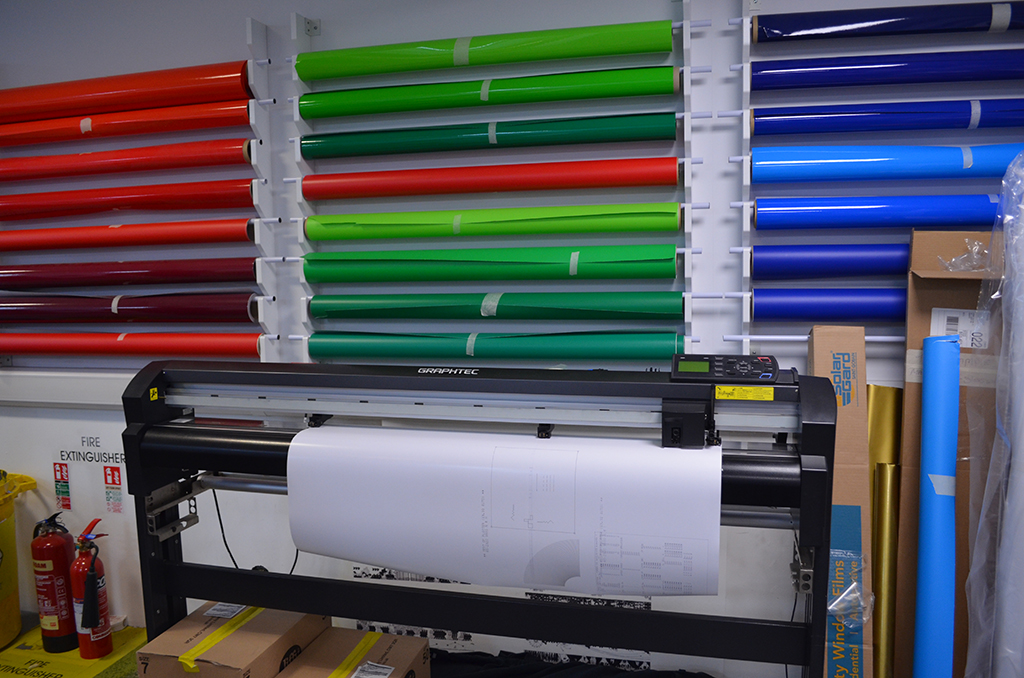 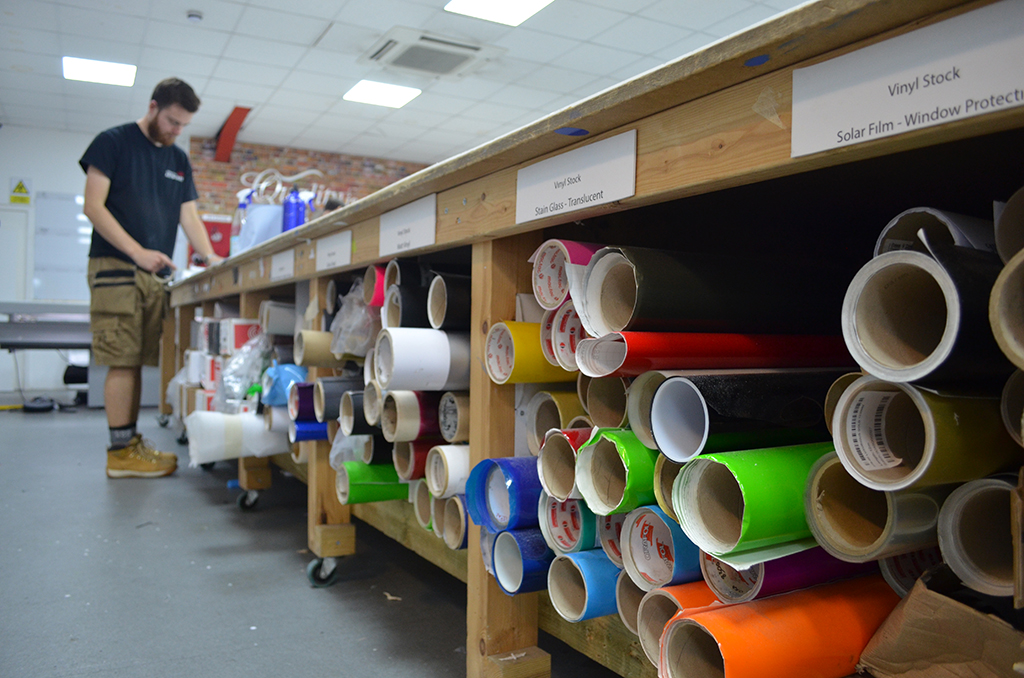 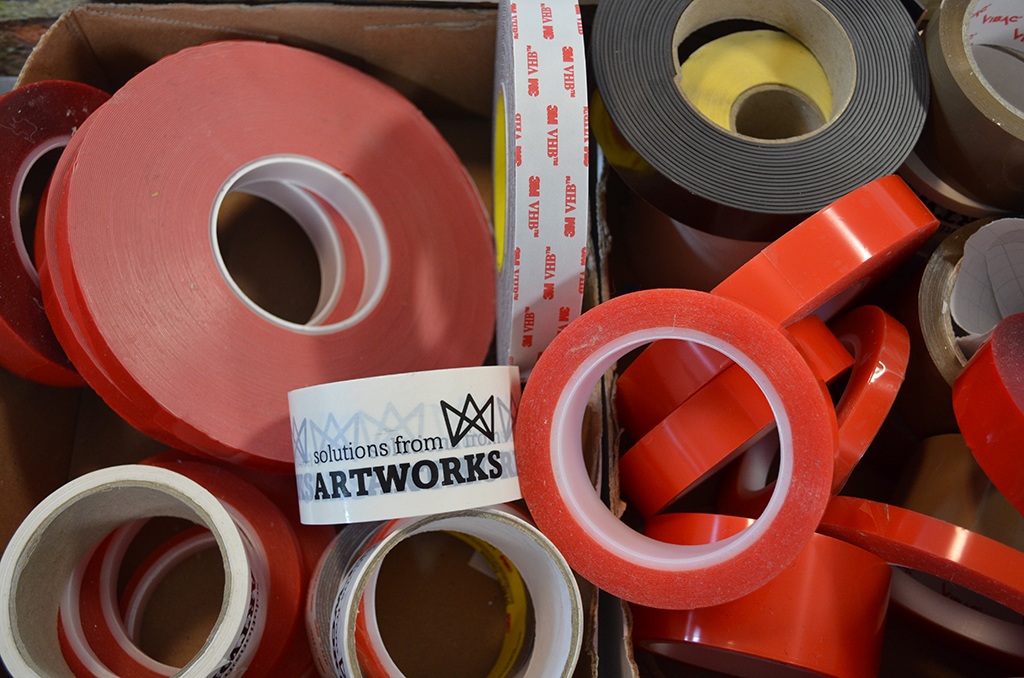 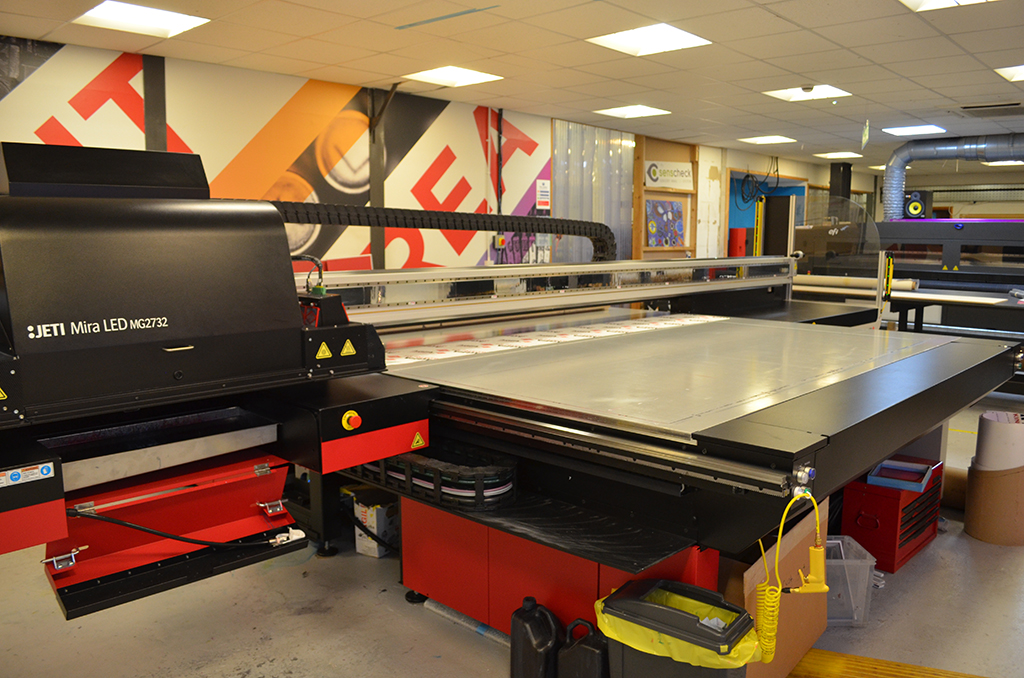 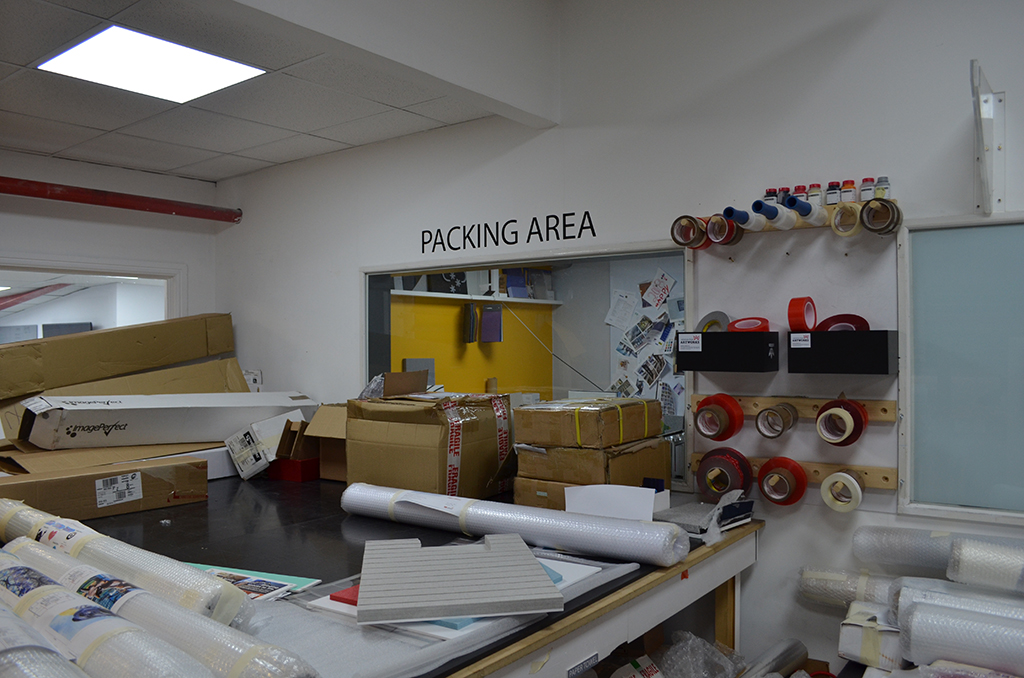 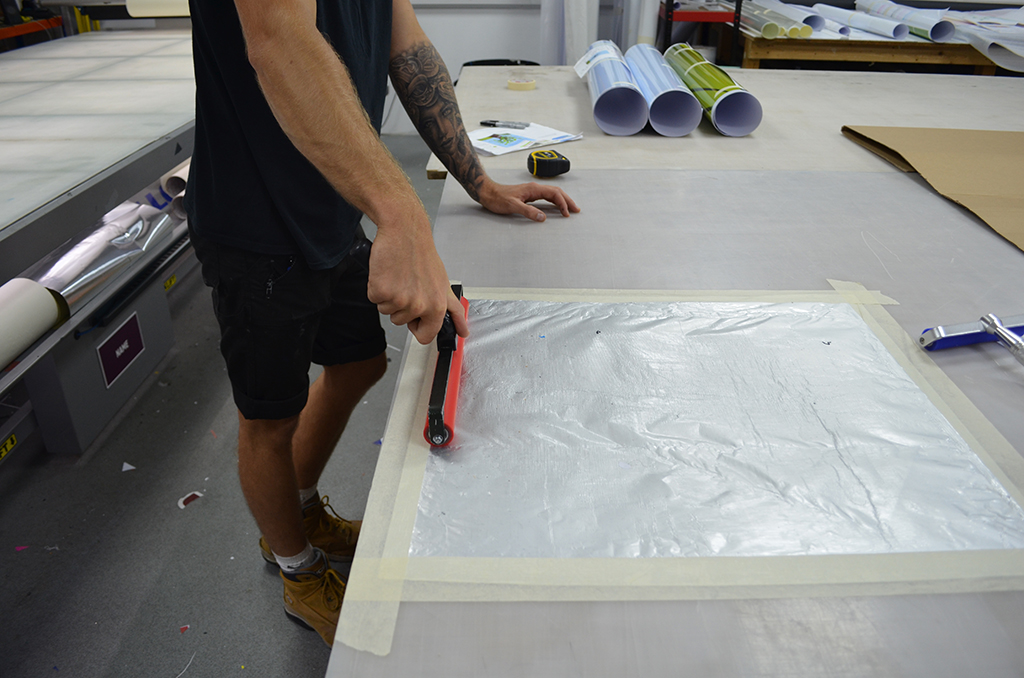 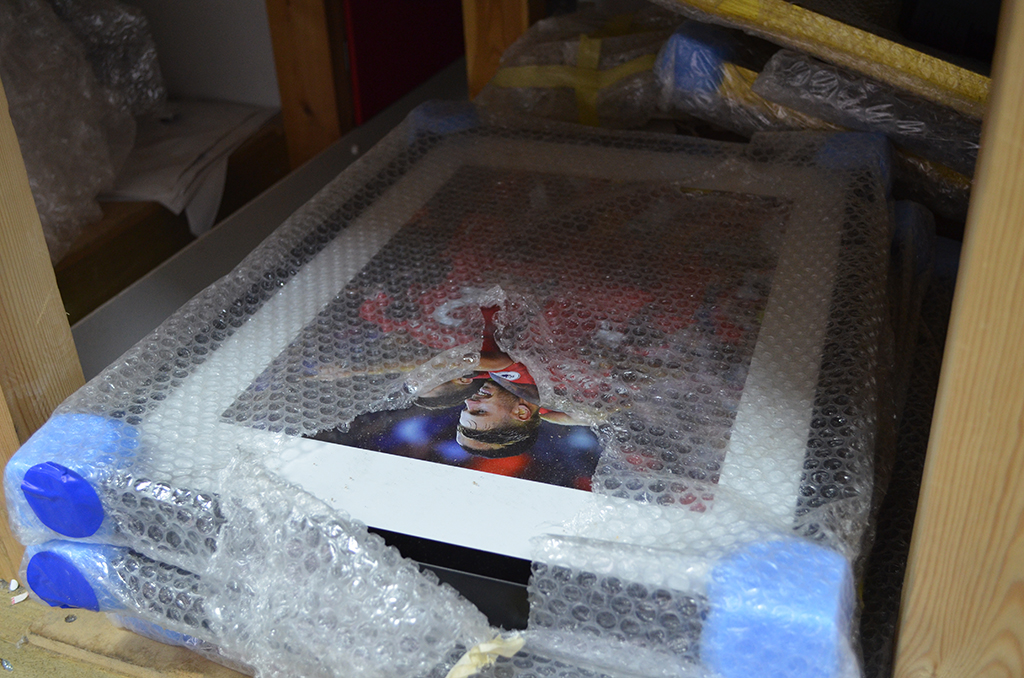 Are there any exciting projects you are currently working on that you can tell me about?

D: Right now, definitely not, well in terms of what I consider to be cool, we definitely don’t do much cool stuff, the majority of the stuff we do is actually very ‘boring’ for instance office graphics, the amount of grey squares we print and grey lines. And when you consider that we can get absolutely anything, it is a bit frustrating, but you’ll find that most offices will want something but don’t want something that will over stimulate the workers so then it will be just grey squares.

D: Actually the Lisson gallery thing that we did for Ai Weiwei, the Chinese artist, I don’t know if you know him?

Oh yeah with the seeds!

D: Yeah with the sunflower seeds! So, he had an exhibition and we did the wallpaper for that and was really amazing. It’s all themed-on immigration and refugees and its really kind of brutal black and white photos. I mean I don’t know if he drew it himself or if he’s one of these artists that’s like ‘oh I have an idea’ and then someone else does all the leg work …. probably is considering how famous he is but either way that was pretty cool.

How many people does a project go through before it goes ahead ?

T: Depends entirely on what it is. Could be between 3 and 6 different people I guess, yeah depends if there’s different processes in-between, and we’ve got outsourced stuff as well essentially. Generally, I suppose just sales person then designer then Pete or John then maybe 2-4 people out in production. But it could be 2 people you know but generally 6-7. I know that you have shift work to maximise the time, so what would the company or you as a creative person do with 6 more hours in the day?

Well in a magical land… so what would the company do with that time?

T: If the company was then open for 24 hours ? Give us more work and find something else for us to do, probably get a night shift. If there were 6 additional hours we’d still end up working an additional 2 hours at the end of those 6 hours. Because of jobs that were booked in last minute.

B: This is the thing because it was never the whole case of having shifts, it was normal hours and then they did extended hours. One person would do a late shift each day of the week, so you would always have one person working later. But they decided that that wasn’t enough, so they’ve extended it to 2 shifts and they would still push it so if that was the case you would still end up working past those 6 hours.

It would still be just as chaotic, and it wouldn’t make things run any smoother but that’s just the industry that’s just how it is.

D: There has always been talk of night shifts. It has always been on the cards to run for 24 hours. Most places do, I think that in an executive’s mind that’s a third more money than what we we’re making before so obviously they want to do it but yeah, it’s not good. Not healthy. Definitely not healthy.

Now this one might be a bit geeky but what’s the coolest machine?

So, what does that do?

B: It literally allows you to route most things in most shapes, its quite quick as well its quite cool. It’s a massive table like a flat-bed printer but instead of a print head it’s got a drill and you can just drill out any shape of anything you can fit on it really so it’s really useful. At the last place we had a thing to make massive letters, but the laser cutter is really useful as well.

D: I think the Laser cutter definitely because well, it’s a laser. Yeah, it’s pretty awesome. Well I think the printer too, I think the v tech is pretty amazing, the amount of things we can print on is pretty cool. And how fast it is, yeah, they are both pretty impressive machines. If you think about all the millions of things its doing at once like putting all those tools in the right place so that when you look at it, it all looks correct and all the individual passes.

Okay thank you, and following on from that which is the most expensive machine here?

Yeah it is very expensive.

Ah well great I guess I’ll be robbing that one.

What do you think the future of printing is? Do you think everything is moving to digital signage?

I think so, I used to tell my old bosses at my old place, if you walk past shops now they have videos on screens and that’s how it’s going to go definitely. It’ll take a long time, but I think anything print wise is eventually going to die out, and it’s sad.

And think there will always be a kind of hard core dedicated base of the printed form, people who will always make books etc. But yes, it’s not going to last. Especially now that the planet is pretty much dead ( shrugs reluctantly .) It’s just not sustainable to keep making all of this crap when it could go on a screen. Well not even that even the screen itself, you can just change your advertisement as it suits you.

T:Do you reckon people in the future like how we cling on to letter press and stuff that they will cling onto digital printing?

Well yeah absolutely, I’ll just be an old man sat on a stool trying to keep it alive

That moves us quite nicely to, what does the company do to be sustainable?

We did try separating everything into a recyclable form and very swiftly realised that there is very little that we do that is recyclable. Maybe cardboard and paper job sheets that is all recycled. Everything else is wax backed, plastic backed, coated in plastic and we’ve got sticky back which you can’t recycle, bits of film that you can’t recycle. All sorts of stuff. It took a long time to get there because a lot of the inks and chemicals we use are very damaging too, so it took a long time to get that disposed of properly.

Artworks Solutions Ltd are a Bristol based design manufacturer, creating bespoke products for a range of UK based customers for the workplace environment. They are a creative company with in house design services and a strong sense being able to the stages of how a piece is designed through to the instillation.