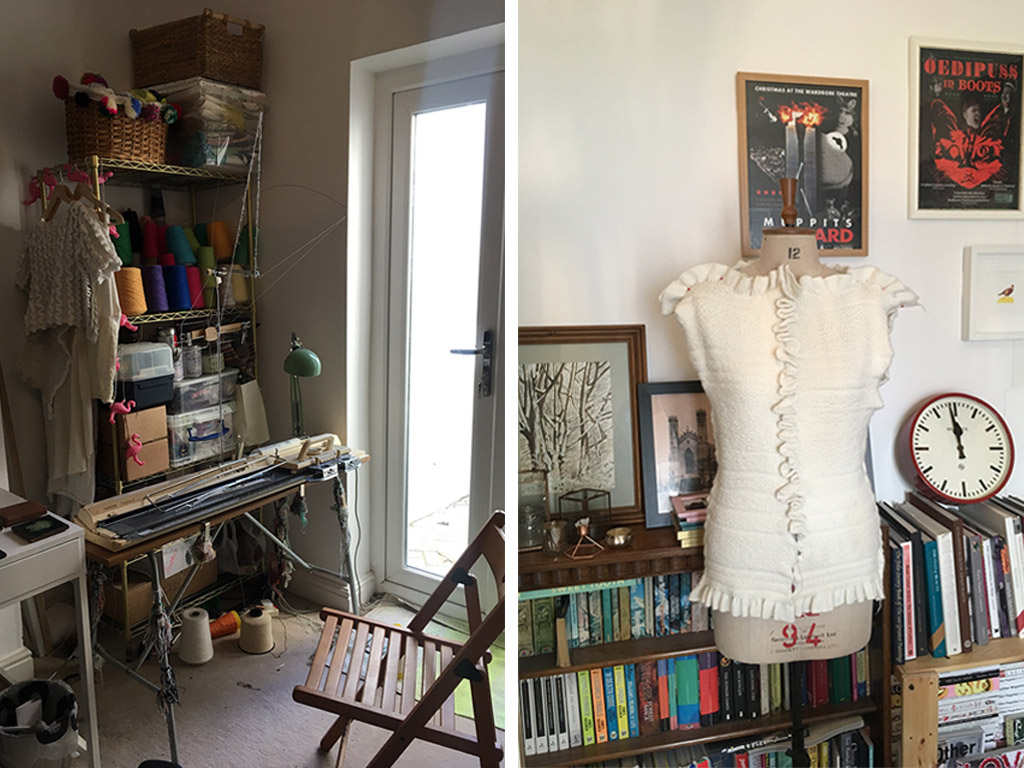 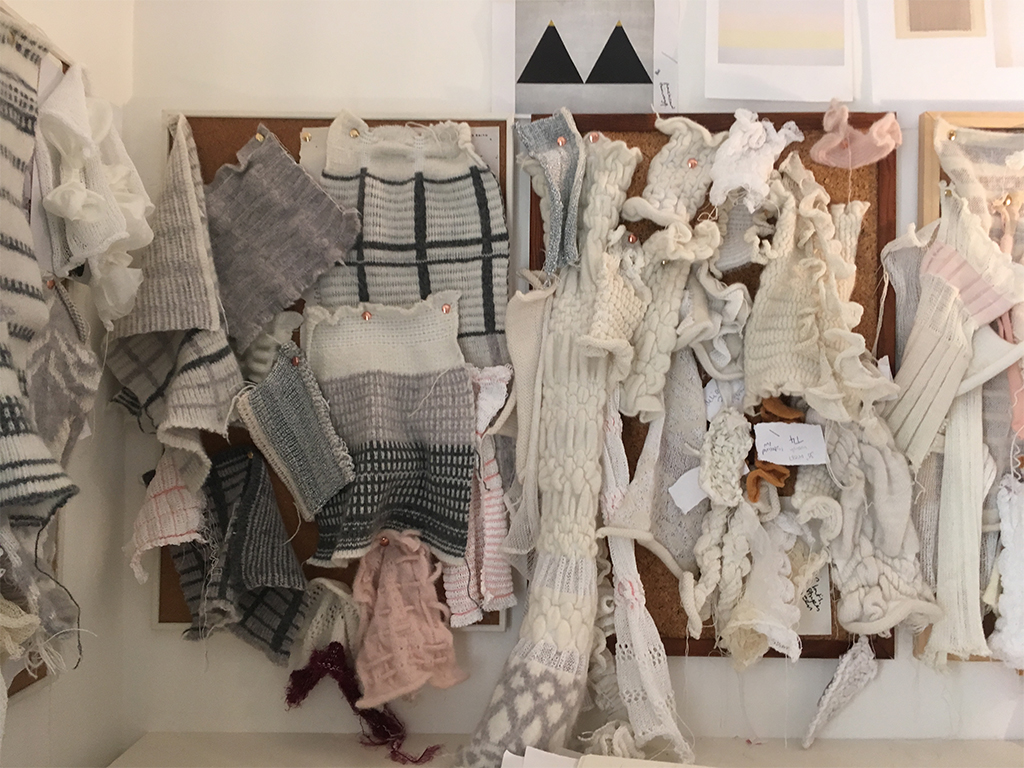 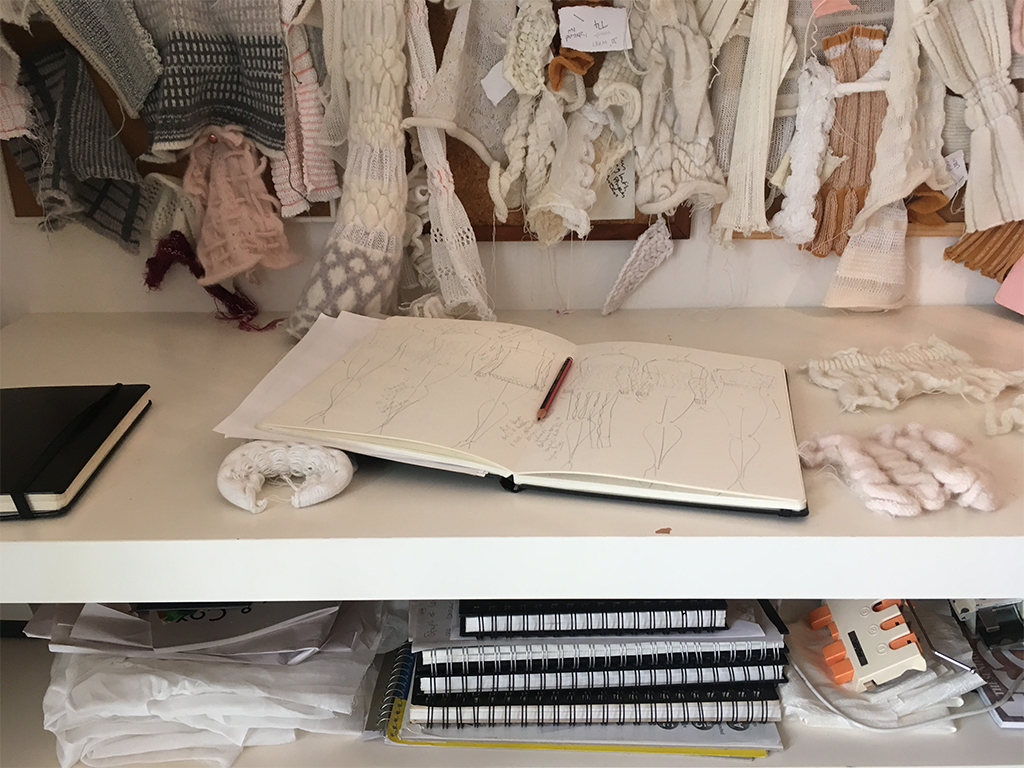 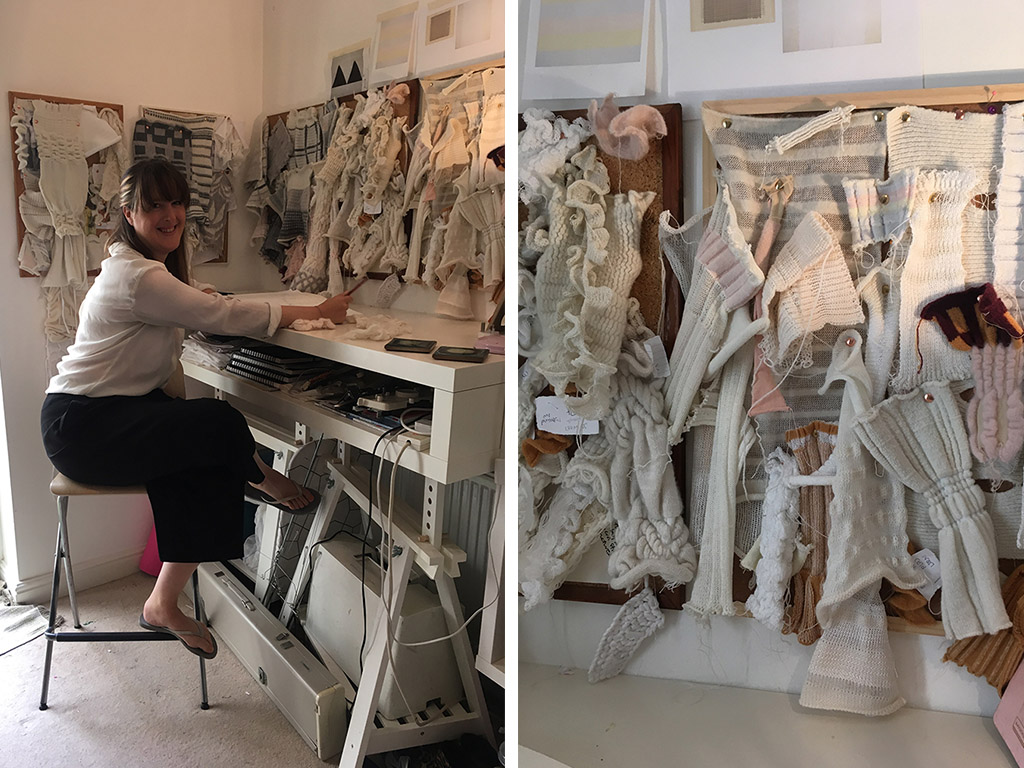 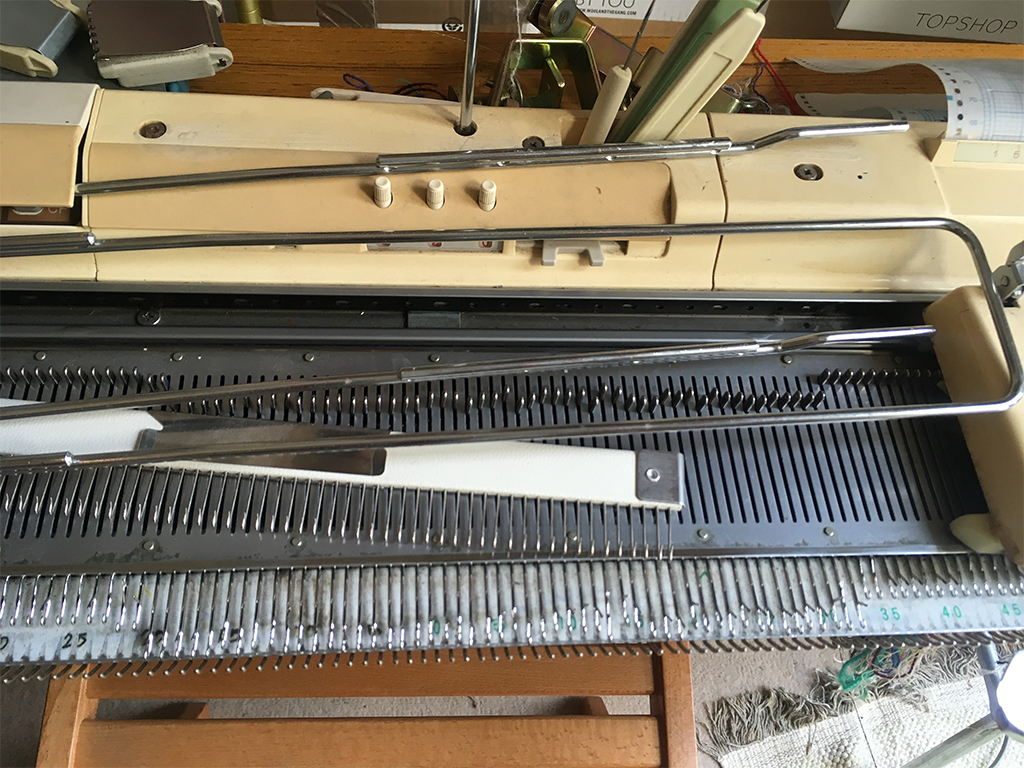 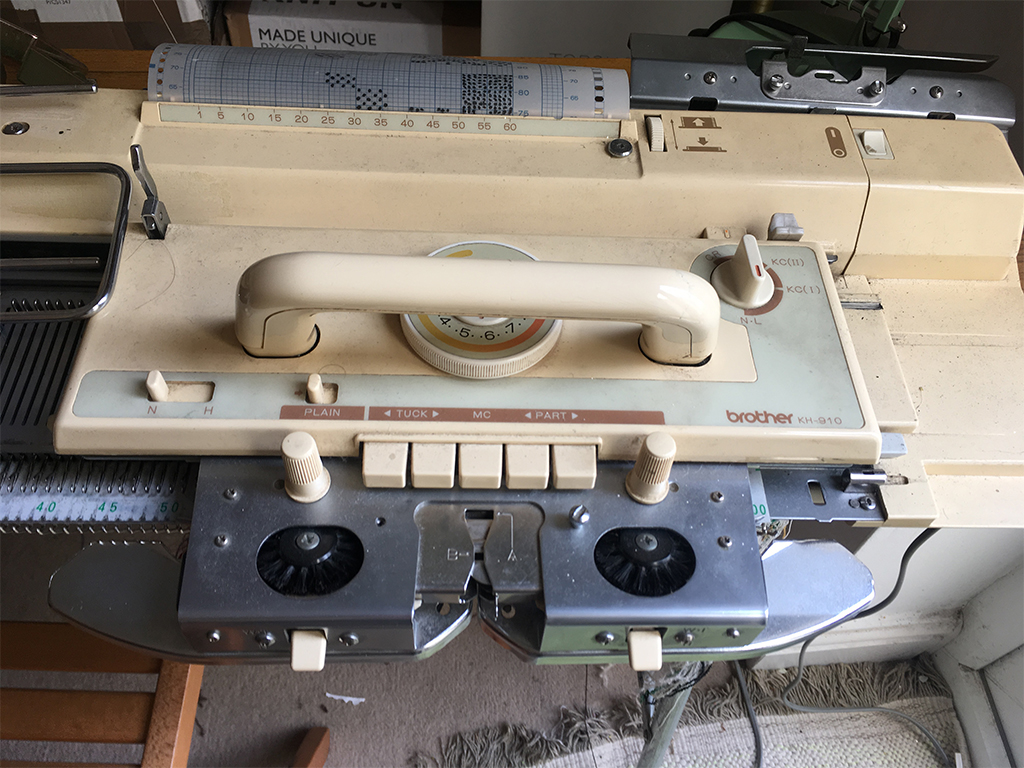 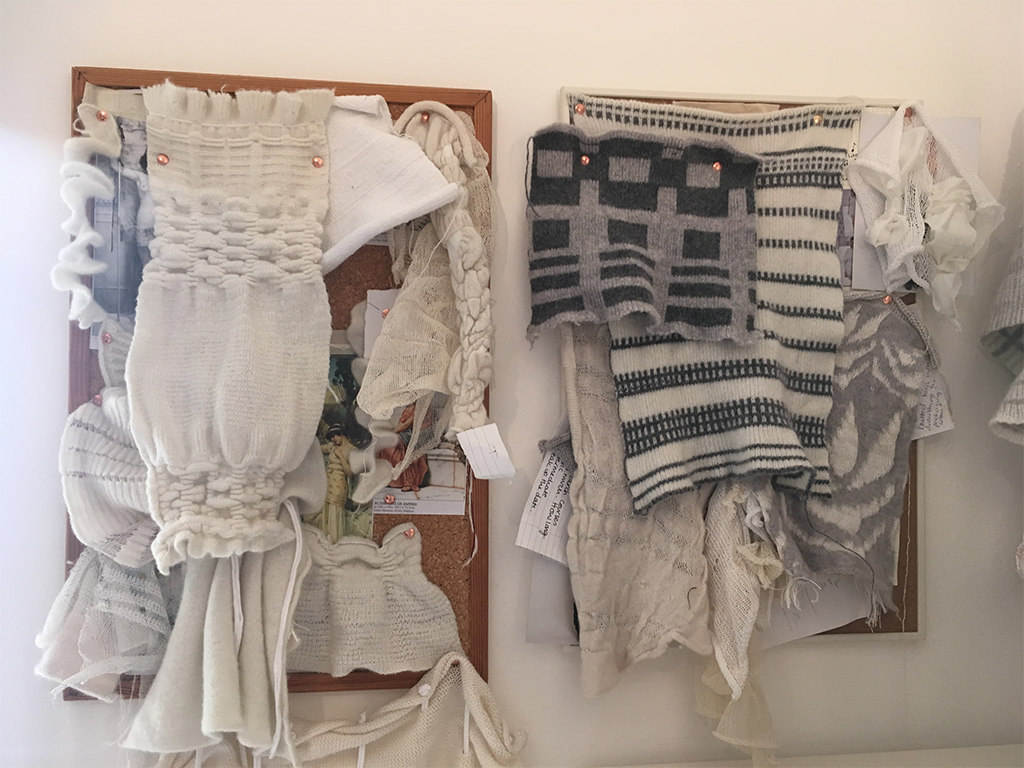 Whats your favourite piece you have made?

There is probably something in each collection that I love, when you put so much time into something sometimes you hate it and sometimes you love it but when it’s on a catwalk it looks amazing.

Are you still in a creative network?

who makes your creative networks/clients and manufacturers?

I sell with made in Bristol in Colston hall. A Christmas market with all different kinds of creatives.  I sell online so I have an online network or Instagram followers.  I teach a lot of people in Bristol so I have a network with the public too.

I’ve got loads of stylists and photographers in my personal network, and one in particular. She and I are quite keen to start up some networking here because she works in London and Bristol so she has quite a big network.

I’ve build my network from various jobs I’ve had. I worked in the theatre and know a lot of people in the theatre crowd and met photographers etc. through that.

I worked some magazine shoots and met some photographers and gradually built my network up.

When you’ve got other people in the same situation as you, its lovely. I mean we are quite lucky, I’ve been just doing this now for a year, I used to have part time jobs but now I only do this.

It’s great, means I have so much more time to just focus on my collections. I’ve done a lot more work, a lot more work because it’s all very good having a part time job but you are not always in a creative place on your days off. You kind of forget that at uni you have luxury of time.

What is ‘Wheres Your Mary?’ platform you set up?

I wanted to set up, I guess a charity or a sort of collective, where the creatives in Bristol all sort of support each other and put people in touch with each other. I did a show, we put together a show. We picked some students and some designers and photographers and it was brilliant, a great success. But it cost me a lot of money so I don’t think I could do it again unless I got funding.

I do want do it again. It was like a one-off thing, we had a little pop up shop too.  My idea was that over summer they would work on their collection, expand it and then show it in a fashion show. The other idea was doing a project with second year students, they design some t – shirt prints and we print them.

There no reason why we shouldn’t have a helpful network in this city. The tutors at fashion were very closed minded and had no helpful network in Bristol, it’s all in London. In second year if you couldn’t afford to go to London and be an intern they had no options for people in this city, I wanted to fix this by connecting the Bristol fashion community.

There are so many creatives here but nothing joining them together. There is nothing solid to connect people and show off the city.

I know of people from Facebook and Instagram occasionally meet them but not often, Bristol does have a lot of creativity its just being able to show it off.

I used to have a studio in Bedminster, it was really big. There were not many fashion people though, more print illustration, fine art. Not many people were in the studios at the same time so wasn’t always that social.

A nice studio would cost a lot of money so I want to make sure I have a regular income. But more and more studios are popping up.

What are the problems that you encounter with your job?

Im going to start making two collections a year and then sell them.

I have busier times of the year, I didn’t make much money over summer I try and think of inventive ways to use the other months to make money, through freelance work and bits and bobs. Last July I made no money.

I need to have find factory to do pieces or am going to be bespoke which would be more expensive, but I need to think of how to market it.

Its good I live at home so I only have to come downstairs, knit in my pyjamas sometimes, as no one is going to see me. I like it because I only make what I want to make.

I want to make light knitwear for the summer, I think getting into shops will help with that. I need to build up a self brand, but its just going slowly.

Amber Hards is a British knitwear designer, currently based in Bristol.

She graduated from the University of the West of England in 2010 with a first class BA (HONS) in fashion/textile design and was selected to show at Graduate Fashion Week in the Bristol and Gala show. Following graduation her work has been exhibited as part of Shanghai Fashion week and as a finalist at the Knit and Stitch Graduate show where she was presented with an innovation award by the Craft Council.

Amber recently designed and made a Christmas corgi jumper as part of Save the Children’s Christmas jumper day campaign, for the wax work model of the Queen to wear at Madame Tussaud’s over Christmas.

Interested in producing innovative and beautiful knitwear, Amber experiments with contrasting yarns and techniques that produce unexpected garments with texture, volume and movement.